On Remembrance Day, the National Association of Federal Retirees recognizes the extraordinary efforts and sacrifices of Canada’s veterans and those who continue to serve. We also honour those who have given their lives serving Canadians and helping citizens of other nations.

Serving military and veteran women face unique workplace and transition challenges that must be addressed. Federal Retirees is proud to co-chair, together with Canada Research Chair and professor Dr.

As the largest association in Canada representing former public servants, Canadian Armed Forces and RCMP members, the National Association of Federal Retirees (Federal Retirees) took part in today’s ceremonies where the Prime Minister made an apology to LGBTQ2 people who were forced out of the pu

In its appearance before the House of Commons Standing Committee on Veterans Affairs, Federal Retirees emphasized the importance of effective, relevant commemoration for all veterans.

Yesterday, the National Association of Federal Retirees joined with 20 veterans organizations, including representatives from the Canadian Armed Forces and Veterans Affairs Canada to do focused work that supports better cross-promotion, inclusion and collaboration – all to ensure veterans, those

Christina Hutchins, the senior director of the Office of Women and LGBTQ2 Veterans at Veterans Affairs Canada, joined the WREN team to discuss her plans for the role. 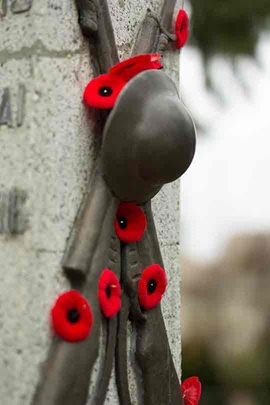 Peter Jackson’s They Shall Not Grow Old allows the story of the First World War to be told by those who were there.

Peter Jackson’s They Shall Not Grow Old is a must-see cinematic tribute to those who served in the First World War.

CAF veteran Dr. Karen Breeck has taken some important lessons from two decades of military service, including how fortunate we are to be Canadian.

On April 9 in Ottawa, Federal Retirees hosted the Veterans Summit, an opportunity to collaborate with the government departments and other NGOs that se

The story of the No. 2 Construction Battalion is an important aspect of Canadian history and shows the passion, bravery and dedication of Black Canadians during the First World War.

This is to notify you that a Final Settlement Agreement has been reached in the Ross, Roy, Satalic class actions (also known as the LGBTQ2 class actions), which may be of interest to you.

Data and transparent reporting are necessary to address the issue of fairness for veterans’ services and benefits.

Each year, the Veterans Ombudsman recognizes the dedication and compassion of Canadians across the country who have gone above and beyond the call of duty in helping Veterans of the Canadian Armed Forces (CAF) and the Royal Canadian Mounted Police (RCMP), and their families.

The Veterans Ombudsman Commendation recognizes the outstanding contributions of individuals and groups across Canada who work to support veterans and their families.

The “marriage after 60” clause: It’s time to get to the bottom of the issue and deliver solutions for veterans and their families.

Federal Retirees CEO Simon Coakeley is calling on the government to ensure equitable outcomes for all veterans.

Since 2018, VAC has been streamlining applications for male veterans with erectile dysfunction caused by medications for psychiatric conditions, but there is no equivalent process for female veterans.

The final stage of distribution of the Veteran’s Service Card (VSC) first announced in September 2018 has now begun. Applications from Canadian Armed Forces (CAF) Veterans who released prior to February 2016 are now being accepted for processing.

A settlement has been reached in the RCMP Gender-Based Harassment and Discrimination Class Action. The settlement was approved by Madam Justice McDonald on May 30, 2017. Claims must be submitted within 180 days of this date.

Holland Cavan added her own creative touch to our Veterans’ Week poster, and we love it!

We’re pleased to announce that WestJet, in addition to Air Canada and Porter Airlines, will be accepting the Federal Retirees Canadian Armed Forces veteran membership card as identification for their military baggage policy as of September 17, 2018.

Working with branches located near 12 Canadian Armed Forces bases across the country, our national office will be conducting town halls with veterans from mid-October to early November.

Send cards to CAF members who can’t be with their loved ones this holiday season!

Every year, November 5 to 11 is Veterans’ Week, an opportunity for Canadians to honour the extraordinary efforts and sacrifices of our veterans.

The federal government announcement today that it will increase the Earnings Loss Benefit for part-time reservists was a welcome message for members of the National Association of Federal Retirees, although much still remains to be done for Canada’s veterans, says the Association.

In 2016, seven former members of the Canadian Armed Forces initiated a class-action lawsuit against the government of Canada alleging sexual harassment, sexual assault or discrimination based on sex, gender, gender identity or sexual orientation in connection with their military service and/or em

As part of his work on the Merlo-Davidson settlement, former Supreme Court of Canada justice Michel Bastarache and his team conducted over 640 interviews with current and former female employees of the RCMP, painting a distressing picture of a toxic culture.

Last week, media reported that 270,000 veterans of the Canadian Armed Forces, the RCMP and their survivors between 2003 and 2010 have been affected by calculation errors on disability pensions to the tune of $165-million.

We would like to look ahead to Nov. 11, Remembrance Day, and recognize the extraordinary efforts and sacrifices of Canada’s veterans as well as those who continue to serve our country.