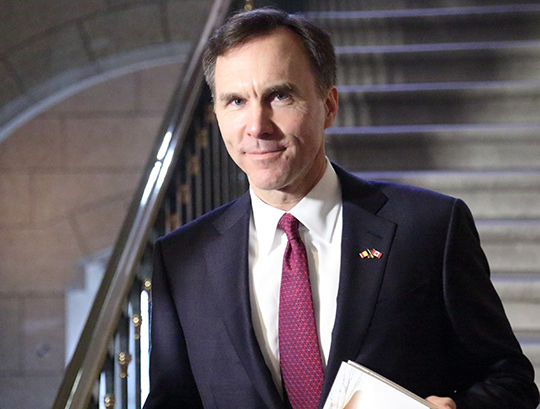 Like all federal budgets, the 2018 edition has lots of shiny goodies like merchandise crammed into a store display case while being light on details. And like the nice things in the display case, not everything will be exactly as shown.

The shiniest object in the display case and something of interest to all ages is the prospect of a national pharmacare plan.

Or more precisely, the creation of an Advisory Council on the Implementation of National Pharmacare. This council became an open secret when Ontario’s health minister, Dr. Eric Hoskins, resigned Monday to be its chair. According to the budget, Dr. Hoskins and board members will begin a national dialogue that will include working with experts from relevant fields as well as with national, provincial, territorial and Indigenous leaders.

The Advisory Council will report to the federal ministers of health and finance and will conduct an economic and social assessment of domestic and international models, and will recommend options on how to move forward together on this important subject.

Media reports indicated this will happen before the 2019 budget and of course in time for the next federal election in October of that year.

But no date is in the budget document. And Finance officials were coy about supplying details.

“Pharmacare is essential, and something we’ve flagged for years in our advocacy work,” says National Association of Federal Retirees president Jean-Guy Soulière. “It’s critical for the thousands of Canadian seniors who cannot afford essential medications. We are looking forward to the Advisory Council getting to work and consulting with seniors and seniors organizations like ours over the coming months.”

Following two years of pay-related issues and hardship for federal employees and retirees, the government used this budget to announce that it will finally scrap the Phoenix pay system, despite having already invested more than $460 million. Over the next six years, a further $450 million will need to be spent to address the ongoing problems. The government will invest $16 million over the next two years to work with experts, federal public sector unions and technology providers on the path to a new pay system.

Additionally, the budget recognized the challenges faced by public servants who have been overpaid by Phoenix who are being asked to repay gross amounts to their employer. It promises that any public servants in this situation will not have to start repaying until after the Canada Revenue Agency processes their tax return and issues their refund (or credits against a tax liability).

The Government also mentions that they are reviewing legislation and engaging with stakeholders about the possibility of changes to legislation that would permit any private or public sector employees in this situation to repay the amount net of withholdings, starting for the 2018 taxation year and forward.

“The Phoenix announcements are a step in the right direction,” says Soulière. “We’ll be watching for immediate focus and action on outstanding pay-related issues for employees and retirees, and making sure this doesn’t happen again.”

The budget also mentions that the government has already started discussions with public service representatives regarding grievances and legal actions related to Phoenix.

Also in the seniors display case was A Community-based Approach to Dementia, which provides $20 million over five years, starting in 2018–19, and $4 million per year ongoing, to the Public Health Agency of Canada to support community-based projects that address the challenges of dementia.

Projects could include programs that provide mental health supports and information about self-care for family caregivers, or initiatives that help Canadians quickly locate resources in their communities, including information about best practices for providing care for people living with dementia. This new funding, the budget says, will help improve quality of life of people living with dementia and ensure that caregivers— who are predominantly women—have access to the resources they need, including mental health supports. But again, more details to come.

Another feature that attracted attention among seniors care professionals is $75 million in the coming fiscal year to support New Brunswick’s Healthy Seniors Pilot Project. From the wording of this, it would appear Ottawa is viewing New Brunswick, with 20 per cent of its population over 65, as a sort of national guinea pig.

Ottawa also uses the budget to serve notice to the provinces and territories that it expects compliance with the Canada Health Act and such practices as extra-billing and user fees will be punished with deductions from the erring jurisdiction’s share of the Canada Health Transfer with reimbursement when the offender has seen the light.

Long-term and home care are missing from the budget. This may be because the feds are still finalizing funding deals under the bilateral health accords it has reached with all 13 provinces and territories. So far just three provinces — New Brunswick, Newfoundland-Labrador and PEI — have resolved their funding deals with Ottawa.

“On the health and seniors front, we saw a handful of fairly piecemeal measures in this budget. What would make a difference is a seniors minister. We had hoped to at least see plans for one in this budget,” says Soulière. “We need a dedicated voice advocating for seniors’ unique needs within government, ensuring we always view public policy decisions through a seniors’ lens.”

There is much in the budget promoting what the current government has already done for veterans such as the new lifetime pension option announced in December, but not much new.

To keep up with the rise in demand and ensure that veterans get services and benefits when they need them, the government proposes to provide $42.8 million over two years, starting in 2018–19, to increase service delivery capacity at Veterans Affairs.

On retirement income security, the budget made passing reference to a need to protect pensioners – people who have spent their working lives contributing to a pension only to see their benefits greatly reduced by employer insolvency as happened with employees at Sears.

The government just doesn’t know what.

As a result, the government will be seeking feedback from pensioners, workers and employers, focusing on “a whole-of-government, evidence-based approach towards addressing retirement security for all Canadians.’’

“Retirement security is incredibly important to our members and seniors in general,” notes Soulière. “Committing to addressing retirement security for all Canadians is a good thing, but it’s not enough – this is another year where we lack national vision on retirement security. I’m particularly concerned that there’s no commitment to withdraw the problematic Bill C-27 on target benefits. Retired and working Canadians have been voicing concerns over this for a year and a half.”

The federal government also committed to leading by example on pay equity. Proactive pay equity legislation will be introduced for federally regulated workplaces – a step forward for women, who on average still earn less than men for work of equal value, and a likely boost to the national economy.

To alleviate poverty, the budget introduced the new Canada Workers Benefit (CWB), a strengthened version of the Working Income Tax Benefit, a tax benefit that will put more money in the pockets of low-income workers.

The new CWB will encourage more people to join the workforce and will offer real help to more than two million Canadians who are working hard to join the middle class, while raising roughly 70,000 Canadians out of poverty.

At the same time, starting in 2019, Ottawa will also make it easier for people to access the benefit they have earned, by making changes that will allow the Canada Revenue Agency to calculate the CWB for any tax filer who hasn’t claimed it.

As a result, everyone who can benefit from the CWB will receive it when they file their taxes.

Compared to the Working Income Tax Benefit, the CWB will increase both the maximum benefits received, as well as the income level at which the benefit is phased out completely. As a result, a low-income worker earning $15,000 would receive up to almost $500 more from the CWB in 2019 than in 2018 to invest in the things that are important to them.

“Budgets are political documents and this one is as expected – a few shiny things are promised, with the stage possibly set for more to come next year, an election year,” says Soulière. “There are measures in here that could benefit Canadian seniors, if implemented quickly and properly, so we’ll be watching that, advocating for our members when we meet elected officials. We’ll know more when we see the budget legislation later this spring.”