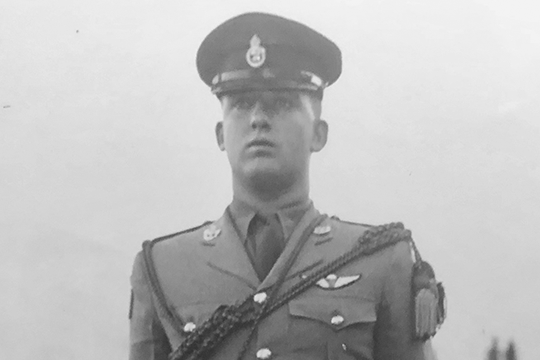 Today is Remembrance Day, an opportunity to pause and pay tribute to those courageous Canadians who have answered the call to serve in order to make the world a safer place for us all. Among them is retired sergeant W. Neil Gow, a loving family man and passionate musician who served in the Canadian military for 28 years. His wife and Association member, Elsie Gow, reached out to us with Neil’s story and, in honour of this important day, we would like to share it with you.

Retired sergeant Neil Gow was the duty bugler in his Princess Patricia's Canadian Light Infantry (PPCLI) Battalion and played in countless Legions across Canada as well as for the Royal Canadian Legion Branch 285 in Calgary, his hometown. Born in North Pine, British Columbia on September 9, 1937, Neil moved to Calgary at young age where he began playing the cornet with the Salvation Army church. In 1956, Neil joined the Canadian army and, on completion of his recruit training, was posted to the 2nd Battalion PPCLI in Calgary.

As the key bugler of the PPCLI band, Neil had the honour of preforming at many special events throughout Canada and abroad such as the Menin Gate Ceremony in Ypres, Belgium and, in 1979, at the funeral of the Right Honorable John Diefenbaker. Personally, Neil considers the chance to perform for the founder of his regiment, Brigadier General Hamilton Gault, to be his greatest musical achievement. In 1981, sergeant Gow retired from the service but continued to play around the world with his successful band, Neil Gow and the Five Knights, including a performance at the 1988 Calgary Winter Olympics.

Todd Gow, Neil’s son, started playing the trumpet and bugle at six years old and now proudly carries on his father’s legacy. Among his fondest memories are the annual trips he took with his father’s band to Hawaii to perform at the Hale Koa military retreat.

After a brave struggle with dementia, Neil passed away on July 20, 2014 surrounded by his loved ones and was sent off with a full honour guard ceremony. Neil is warmly remembered as a man who was larger than life and who expressed his joyful spirit through his music.

We hope you’ll join us at 11:00 a.m. in observing a moment of silence to pay your respects to Paratrooper and PPCLI Duty Bugler Sgt. (Ret'd) W. Neil Gow and all Canada’s veterans wherever you may be.

Telling our stories is an important way to raise awareness of issues important to Canadians and to strengthen our connections by learning about the experiences of fellow retirees who devoted their lives to Canada and continue to contribute to society in meaningful ways. If you know a member with an extraordinary story, please contact us at yourstory@federalretirees.ca.