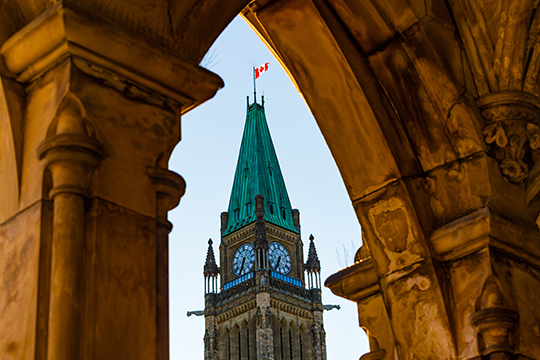 Keeping with tradition, Freeland wore new shoes to deliver the budget, black Zvelle pumps, a company with a showroom in her Toronto riding.

“This budget is about finishing the fight against COVID. It’s about healing the economic wounds left by the COVID recession. And it’s about creating more jobs and prosperity for Canadians in the days – and decades – to come,” Freeland said in her opening remarks.

The COVID-19 recession is the steepest and fastest economic contraction since the Great Depression, she added. Freeland said Budget 2021 stays within the $100 billion over three years spending envelope outlined in the 2020 Fall Economic Statement.

The Parliamentary Budget Officer (PBO) had estimated the deficit for the 2020/21 fiscal year would be $363.4 billion, while the C.D. Howe Institute forecast $388.7 billion.

Paying for such historic government spending depends on a growing Canadian economy. Freeland said during her press conference that Canada’s GDP grew almost 10 per cent in the last quarter of 2020. She added that while government borrowing at current historically low levels makes it affordable, the government has moved much of its bonds into long bonds, locking in the debt at these low rates. She said the level of debt in long bonds was at 29 per cent in the last budget, and it's now nearing a 42 per cent load.

Freeland’s first major announcement in her budget speech was for seniors, to whom she apologized for the devastation that the pandemic has caused them – particularly those in long-term care.

“Our elders have been this virus’s principal victims. The pandemic has preyed on them mercilessly, ending thousands of lives and forcing all seniors into fearful isolation. We have failed so many of those living in long-term care facilities. To them, and to their families, let me say this: I am so sorry. We owe you so much better than this,” Freeland said.

The budget proposes a $3 billion investment over five years starting in 2022-23 to support provinces and territories, ensuring standards of care in long-term care facilities are met. In the 2020 Fall Economic Statement, another $1 billion was announced for the Safe Long-term Care Fund.

Budget 2021 also sets aside $29.8 million over six years, starting in 2021-22, for Health Canada to advance the palliative care strategy for long-term and supportive care needs. There will be improved data infrastructure for Statistics Canada to monitor supportive care, primary care and pharmaceuticals, with $41.3 million over six years starting in 2021-22 and $7.7 million ongoing.

And in an effort to support seniors living in their own homes, the budget proposes to provide $90 million over three years, starting in 2021-22, for Employment and Social Development Canada to launch an Age Well at Home initiative. This initiative would aim to assist community-based organizations that provide practical support to help low-income and otherwise vulnerable seniors age in place, such as meal prep, home maintenance and transportation.

“The continuum of care – from home care to long-term care and all points in between – has been the foundation of our advocacy work for years, and I’ve already shared congratulations with Seniors Minister Deb Schulte for making long-term care a priority,” notes Association president Jean-Guy Soulière. “While the budget does not specify how we will achieve national standards while respecting jurisdictions, we look forward to governments getting on with what Canadians are demanding, and urgently: committing to national standards tied to funding that will make a real difference to the quality of long-term care.”

The budget increases Old Age Security for Canadians aged 75 and older, which will provide up to $766 more for eligible seniors in the first year, and that will grow with indexation – but the increased payments will only start in July 2022. It also provides a one-time payment of $500 in August 2021 – which the budget document notes is a “taxable grant payment” – to OAS pensioners who will be 75 or over as of June 2022. In total, these two measures represent $12 billion over five years in additional financial support, beginning in 2021-22, and at least $3 billion per year ongoing, to be delivered by Employment and Social Development Canada.

The budget offered $688 million to Public Services and Procurement Canada to support the workforce dedicated to processing pay transactions. This includes a target of eliminating the Phoenix pay system backlog by December 2022.

“We know that some Phoenix-impacted retirees are still waiting to apply for their damages settlement, and that’s not right,” says Soulière. “We’ll be advocating to ensure that gets prioritized, and much more quickly than the government is currently acting on it.”

A vague commitment promises changes to the Pension Benefits Standards Act as well and is aimed at introducing a new framework for multi-employer, negotiated contribution pension plans that will “strengthen plan governance, transparency and sustainability of benefits.”

“This was a significant win for our advocacy – though the devil is as always in the details,” notes Soulière. “We have asked the government to encourage innovation and bring better pension coverage to more Canadians, and – depending on those details – that’s what this could do.”

In terms of health care, funding for the provinces through the Canada Health Transfer (CHT) will be boosted to $43.1 billion for 2021-22. The federal government announced in March 2021 a further $4 billion through a one-time pandemic top-up to the CHT.

Looking to future pandemics, Freeland announced the investment of $2.2 billion in biomanufacturing and life-sciences to aid Canadian vaccine manufacturing.

To support Canadians’ mental health, Freeland said that the Canadian Radio-television and Telecommunications Commission (CRTC) will now start exploring the creation of a three-digit mental health hotline, with funds being made available when the service is launched. And to combat the opioid crisis, Budget 2021 proposes to provide an additional $116 million over two years for harm reduction, treatment and prevention, starting in 2021-22, building on the $66 million invested in the 2020 Fall Economic Statement.

Unfortunately, the promised national pharmacare program was punted further downfield, with the government only committing to future study with provincial stakeholders.

One of the biggest new announcements is the fulfilment of a Liberal promise of a National Childcare strategy first made in 1993. Freeland said that because of the pandemic, women’s participation in the labour force is down to its lowest level in more than two decades. While childcare is not a women’s issue alone, she pointed out that the majority of child care – like most caregiving – is still performed by women, and so Canada is in need of feminist economic policy. The government is setting investing $30 billion over five years, reaching $8.3 billion every year, permanently, to build a high-quality, affordable and accessible early-learning and child-care system across Canada. The goal is to model nationally on the $10 per day program that exists in Quebec, which will still receive their share of money that the federal government hopes they will use on child care.

“This budget recognizes the role of caregivers, particularly women who do take on more caregiving duties,” notes Soulière. “We would have liked to see measures for the informal caregivers involved in supporting seniors, however.”

When it comes to affordable housing, the budget proposes investing $2.5 billion and reallocates $1.3 billion in existing funding to help build, repair and support 35,000 existing affordable housing units. Government officials confirmed to Federal Retirees that this will include housing options for seniors. And in an interesting twist, they’ve allocated $300 million to help convert pandemic-vacant office spaces into low-cost housing.

To fight homelessness, the budget wants to maintain funding offered in the fall update and add an additional $567 million over two years.  Budget 2021 also proposes to provide $45 million over two years, beginning in 2022-23, for a pilot a program aimed at reducing veteran homelessness through the provision of rent supplements and wrap-around services for homeless veterans such as counselling, addiction treatment and job search assistance.

Funds are targeted to address sexual misconduct and gender-based violence in the military, including an additional $74 million over five years to enhance support services for victims, including legal advice and peer support groups, as well as to enhance research and training.

Mention was made of “other initiatives” to boost the military’s capacity to address harassment and violence.

The budget tags $140 million over five years to Veterans Affairs Canada for programming to cover mental health-care costs for veterans with PTSD, depressive or anxiety disorders while their disability benefits application is being processed. An additional $15 million over three years will be added to the Veteran and Family Well-Being Fund to support veterans through the COVID-19 recovery.

Veterans Affairs will have $29 million to enhance service capacity – likely to help streamline processes and deal with the benefits backlog that has dogged the department and hurt veterans for years.

“There are good investments in this budget for veterans, but it’s falling short of telling us how the Government of Canada will move its military toward more equitable outcomes and how these measures will address the long-standing gaps serving women have faced,” says Soulière. “We know it’s a government priority – it’s in the veterans affairs minister’s mandate letter – so we’ll have some more work to do here.”

Kickstarting the economy for recovery

In terms of helping restart the economy, other big-ticket items were the extensions of pandemic fiscal support programs. The wage subsidy, rent subsidy and lockdown support for businesses and other employers will be extended to Sept. 25, 2021, for an estimated total of $12.1 billion – though the Canada Emergency Response Benefit (CERB) will fall to $300 a week after July 17.

“About 300,000 Canadians who had a job before the pandemic are still out of work,” Freeland said during her press conference. “More Canadians may lose their jobs in this month’s lockdowns.”

A new Canada Recovery Hiring Program, which will run from June to November will provide $595 million to make it easier for businesses to hire back laid-off workers or to bring on new ones. The Canada Digital Adoption Program will provide $4 billion to help up to 160,000 small and medium-sized businesses buy and adopt new technologies, and will offer advice and training for 28,000, hopefully creating a Canadian technology pool of workers. Also, larger corporations will be allowed to expense $1.5 million in eligible technology investments, representing a $2.2 billion savings to them over the next five years.

In terms of greening industry, $5 billion over seven years was promised, starting in 2021-22, in the Net Zero Accelerator. This is on top of the $3 billion committed in December to help more companies invest to reduce their greenhouse gas emissions.

The budget also promises investing $17.6 billion in a green recovery to help Canada to reach its target to conserve 25 per cent of Canada’s lands and oceans by 2025, exceed its Paris climate targets and reduce emissions by 36 per cent below 2005 levels by 2030, and move forward on a path to reach net-zero emission by 2050.

The Canada Workers Benefit expands to $8.9 billion over six years, extending income top-ups for a million low wage Canadians, and raising the minimum wage to $15 an hour nationally. The budget also extends the maximum period of employment insurance sickness benefits from 15 weeks to 26 weeks.

In terms of raising taxes, the rich got pinched with a luxury tax on new cars and private aircraft worth more than $100,000 and pleasure boats worth more than $250,000. Large, international digital companies were also forewarned that the government will soon start unilaterally taxing them by summer.

The budget announced the intention to put excise taxes on vaping products and add $4 a carton to the price of cigarettes, which will generate $1.2 billion over five years starting 2021-22.