The conversation is just getting started, says Vibrant Voices 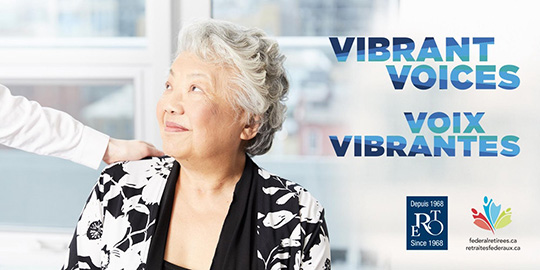 The National Association of Federal Retirees and the Retired Teachers of Ontario (RTO/ERO), together representing 150,000 voters, partnered to present Vibrant Voices, a community-based advocacy campaign to influence political action for Ontario’s seniors during Ontario’s election.

Yesterday, Ontario’s election ended following a long, turbulent and surprising campaign that has Doug Ford forming the province’s new majority government with 76 seats, with the NDP in opposition at 40 seats under Andrea Horwath’s leadership. The Liberals lost party status, dropping from 55 to 7 seats, and while Kathleen Wynne won her riding, she stepped down as party leader late in the evening. The Greens gained one seat in Guelph with Mike Schreiner.

The Vibrant Voices collaboration helped candidates understand seniors priorities and expectations of Ontario’s next government – the need to ensure our communities are age-friendly and promote access, engagement and better quality of life for older persons; that our health and social care professionals have geriatric training and expertise, essential to caring for an aging population; and that elder abuse is identified and ended.

“Our work is just getting started and this is just the beginning of the conversations we need to have with Ontario’s seniors, on the issues that matter most,” notes Federal Retirees president Jean-Guy Soulière. “Our members are looking forward to picking up the conversations we’ve had with candidates over the past months – now our MPPs – and moving this new government to action.”

In early April, RTO/ERO and Federal Retirees members and communities came together at a town hall in downtown Toronto with viewing parties throughout the province. Vibrant Voices have kept members informed and engaged throughout the campaign, sending hundreds of emails with pointed questions pushing parties to share their platforms for seniors. Liberal and NDP positions were published and shared with more than 150,000 throughout the province, but the Progressive Conservative responses were continually delayed. The party’s five-point platform has a commitment to add new long-term beds and supports for mental health and housing.

“Ontario’s new government has some big issues on the table for seniors, whether they included addressing them in their party’s platform or not,” says Martha Foster, president of RTO/ERO. “These issues that shape how we live and how we continue to contribute to our communities, and Ontarians expect this new government to deal with these issues so that participation, independence and belonging are truly possible at any age.”

RTO/ERO and Federal Retirees ran an incredible campaign that captured seniors’ passion to strive for better and gained the attention of Ontario’s new government. Both organizations look forward to continuing to speak clearly and together with seniors in Ontario and the rest of Canada to ensure Vibrant Voices are heard loud and clear by all levels of government.

Sign up at www.vibrantvoices.ca and learn what’s next for Vibrant Voices.

Retired Teachers of Ontario/Les enseignantes et enseignants retraités de l’Ontario is a bilingual trusted voice on healthy, active living in the retirement journey for the broader education community – including early years, school boards, post-secondary and private schools. RTO/ERO promotes a wide range of world-class programs, social networks and assistance throughout retirement. Most of RTO/ERO’s members reside in Ontario, but members live across Canada. The organization has 46 districts in Ontario and 2 in British Columbia. RTO/ERO has the largest voluntary group insurance plan, owned and directed by members, for the education sector in Canada – with 100,000 participants. RTO/ERO is celebrating its 50th anniversary this year.

The National Association of Federal Retirees advocates to protect the hard-earned pensions and benefits of retired members of the federal public service, Canadian Armed Forces, Royal Canadian Mounted Police and retired federally appointed judges, as well as their partners and survivors since 1963.