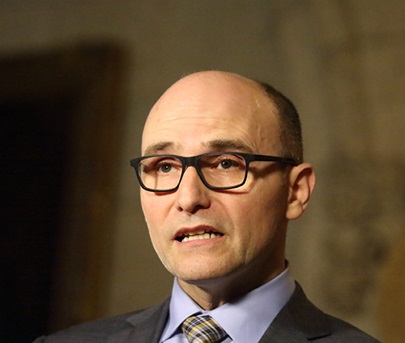 At the International Longevity Centre Canada’s conference focused on building inclusive, age-friendly societies at the University of Ottawa on May 1, seniors-focused researchers and advocates heard from Minister of Families, Children and Social Development, the honourable Jean-Yves Duclos, whose mandate also includes seniors.

National Association of Federal Retirees advocacy director Sayward Montague asked Minister Duclos how this federal government will focus on a National Seniors Strategy – which is especially relevant following the recent release of a report on Advancing Inclusion and Quality of Life for Seniors by the House of Commons Committee on Human Resources, Skills and Social Development and Status of Persons with Disabilities.

Minister Duclos covered measures the Trudeau government has taken to address issues that impact Canadians, including a poverty reduction strategy that focused on the Canada Child Benefit, investments in early learning and childcare and increases made to the Guaranteed Income Supplement. The minister also noted changes that could benefit seniors – national housing strategy and accessibility standards, homecare and mental health investments, the reversal of changes made under the Harper government to the eligibility age for Old Age Security and Canada Pension Plan enhancements – although CPP enhancements will make the most positive impact on future generations of seniors.

But it was the minister’s take on a comprehensive and focused National Seniors Strategy that caused concern among advocates in the crowd.

“All of these things were done in the early part of the mandate, and we’re being asked whether we want to fit all of these pieces plus others under a National Seniors Strategy,” said Duclos. “It’s too early to say whether we’ll have one, but it’s something that seems increasingly relevant from my limited perspective. Of course, it wouldn’t be me, it would be a combination of ministers, because many ministers have a responsibility for seniors.”

“We understand that seniors issues touch many departments and agencies, and levels of government for that matter,” says Federal Retirees president Jean-Guy Soulière. “But continuing a fractured approach without the overarching guidance of a national seniors strategy to explicitly address what seniors advocates have repeatedly identified, and without a dedicated minister to advocate for seniors at the cabinet table, hurts seniors, their families and communities.”

Federal Retirees continues to demand a National Seniors Strategy and a minister dedicated to seniors. Liberal convention delegates recognized the importance of a seniors minister and in April, voted to make a proposed policy resolution on a seniors’ ministry into party policy. But party policy doesn’t always automatically translate into government policy and action.

A National Seniors Strategy has been at the heart of policy changes promoted by Liberal MP Marc Serré (Nickel Belt) and was the focus of the Commons human resources committee’s recent study and recommendations.

A National Seniors Strategy rests on our key pillars – plus funding and a minister to fight for it. Federal Retirees and seniors advocates across Canada believe a seniors strategy needs to focus on infrastructure for care, caregiver support, home care and age-friendly communities.

“We have a minister for youth, but no minister expressly responsible for seniors, which is becoming the largest demographic in the country,” says Soulière. “What we heard yesterday gives the distinct impression that a seniors strategy is not a priority. We’re here to tell the government that it is a priority and it will continue to be a priority for seniors as we get closer to the 2019 federal election.”