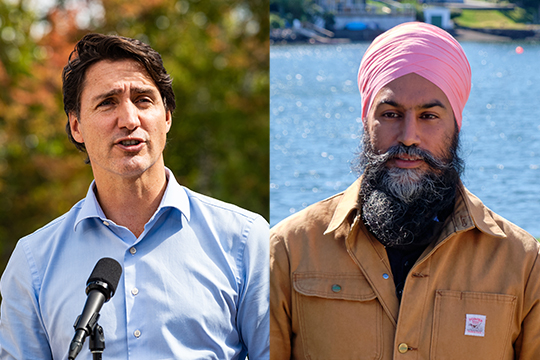 The Liberal-NDP agreement promises action in seven key policy areas, including a commitment to move forward on a national pharmacare program.

On March 22, 2022, the Liberals and NDP announced an agreement that would see the NDP support the Liberal government on confidence votes in exchange for commitments on some of the NDP’s priorities. The agreement includes provisions for dental care, pharmacare, movement on climate change, housing, reconciliation, child care and tax fairness.

What the parties say

An NDP release stated, “in these highly uncertain and difficult times, Canadians expect us to come together and get to work to help make their lives better.” The Liberals, on the other hand, have said they were given a clear mandate on which Canadians expect action, with “a growing economy that supports their families with green jobs and climate action, more housing and child-care affordability, and stronger health care.”

“The Association welcomes this step forward, to put partisan lines aside and get to work on issues that seniors and all Canadians care about. We hope that this will produce results that most Canadians wanted to see by voting for one of these parties,” said Anthony Pizzino, CEO of the National Association of Federal Retirees.

On dental care, the agreement would see a new program for low-income Canadians, starting with children under 12 in 2022 and expanding in 2023 to include adolescents under 18, seniors and persons living with a disability. Full implementation is expected by 2025 and will include families with an annual income of less than $90,000 with no co-pays for anyone with an annual income under $70,000.

Pharmacare also features prominently in the agreement, with the intent to establish a national pharmacare program by passing a Canada Pharmacare Act by the end of 2023 and tasking the National Drug Agency to develop a national formulary of essential medicines and a bulk purchasing plan by 2025.

The agreement provides for a $500 one-time top-up to the Canada Housing Benefit in 2022, renewable based on cost of living, and pledges legislative action on long-term care standards. A Safe Long-Term Care Act — already promised by the Liberals in their 2021 election platform and featured in the mandate letter of health minister Jean-Yves Duclos — would ensure Canadians have the care they deserve, no matter where they live.

Can they do this?

There is precedent for this type of agreement, and they tend to last as long as both parties continue to agree to the terms. The agreement includes regular meetings of leadership from both parties and monthly taking-stock meetings by an oversight group. For its part as an opposition party, the NDP will continue to play a role in keeping the government accountable, and the official opposition — a role that is essential to a healthy democracy — remains the Conservatives.

“Our job as an advocacy organization remains the same,” notes Pizzino. “As a non-partisan organization, we’ll continue to work hard and collaborate across party lines, to push both government and opposition parties to act in the best interests of all Canadians — in particular our own members, and all older adults in Canada — on the issues most important to them, from retirement security, to a national seniors strategy and standards for long-term care, to pharmacare and improved veteran well-being.”