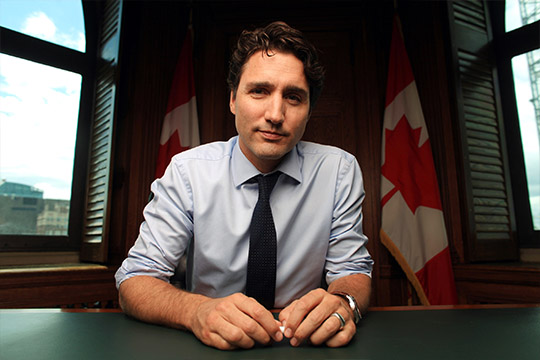 The Liberals, led by current Prime Minister Justin Trudeau, offered up a 91-page election platform containing $78 billion worth of promises.

The Liberal platform attempts to have something for everyone, while also criticizing Erin O’Toole for his opposition to Liberal programs of the past. It includes lots of photos of Prime Minister Justin Trudeau with Canadians of all stripes.

Knowing the writ was about to be dropped, the Association's writers reached out to the PMO to request an interview about seniors’ issues in the week before the PM’s walk from Rideau Cottage to Rideau Hall began. We continued requesting the interview into the campaign, to no avail. We were politely rebuffed in the end.

So, after drilling into Forward. For Everyone, a 91-page election platform containing $78 billion worth of promises, we present the highlights most relevant to our members.

On long-term care, the Liberals plan on investing $9 billion over five years in a number of initiatives negotiated with the provinces and territories. Some of that will go directly to improving the quality and availability of long-term care homes and beds.  They plan to implement strict infection prevention and control measures, through more provincial and territorial facility inspections. There’s also $100 million for small businesses to improve ventilation and air quality that for-profit and non-profit long-term care homes can apply for. One of the biggest ticket items in this field is the $1.7 billion over five years plan to raise wages for personal support workers, including a guaranteed minimum wage of at least $25 per hour. And they’re promising to train up to 50,000 new personal support workers.

The Liberals note that they brought in their Age Well at Home Initiative to help vulnerable seniors continue to live in their own homes. They then tout their increase to the Canada and Quebec Pension Plan’s maximum yearly benefit for future retirees by about 50 per cent. They claim that these initiatives have decreased the poverty rate amongst seniors by 20 per cent.

In terms of helping seniors remain living in their own homes, they’re offering a tax credit for seniors who renovate to make their homes more accessible, measures such as adding a handrail or widening a doorframe. They will double the Home Accessibility Tax Credit, giving you up to $1,500. They’ll also strike a panel of experts to think about establishing an Aging at Home Benefit.

For those moving in with their children, there’s a multi-generational tax renovation credit that would start next year at the cost of $101 million, rising to $140 million in 2025-26. When adding a secondary unit to your home for an immediate or extended family member, families will be able to claim a 15 per cent tax credit for up to $50,000 in renovation and construction costs, saving up to $7,500. If you want to make that home more green, there will be grants of up to $5,000 for home retrofits and interest-free loans of up to $40,000 for deep retrofits.

In terms of navigating the labyrinth of government programs, the Liberals are offering to introduce a 1-800 as a single point of access for seniors.

With respect to health care, the Liberals will require that travellers on interprovincial trains, commercial flights, cruise ships, and other federally regulated vessels be vaccinated. Same goes for federal employees.

They’ll also launch a $1 billion COVID-19 Proof of Vaccination Fund to support provinces and territories that want to implement a vaccine passport for non-essential businesses and public spaces in their jurisdictions. Legislation will be drafted to protect businesses that comply with being sued for doing so. And they promise they’re getting enough vaccines so that anyone who qualifies for a booster shot can get a free one. Finally, on COVID, there’s $100 million to study the long-term health impacts of getting the virus, including “long-COVID” sufferers, vulnerable populations and children.

Staying with health care, the platform promises to immediately invest $6 billion — on top of $4 billion already committed — to support the elimination of health system waitlists. This will be negotiated with the provinces, which are actually responsible for administering health care. There’s also a provision for sending them $3.2 billion for the hiring of 7,500 new family doctors, nurses and nurse practitioners. And $400 million over four years to build on the growing demand for virtual care that arose during the pandemic.

The Liberals also propose a new health funding stream, the Canada Mental Health Transfer. Using the Canada Health Act, the transfer will help establish national standards that can be applied according to the unique needs in each region. This is worth $4.5 billion over five years. They’ll also review the Disability Tax Credit, CPP-Disability and other federal benefits and programs to ensure they are available to people experiencing mental health challenges.

As promised in the 2021 budget, they’ll introduce a three-digit mental health crisis and suicide prevention hotline, build on the Economic Mobility Pathways Pilot and work with employers and communities to welcome 2,000 skilled refugees to fill labour shortages in high demand areas such as health care.

The Liberal platform makes no mention of pharmacare. During the English debate, Trudeau said that while the Liberals are committed to the idea of pharmacare, it could not be included in this year's platform.

And for veterans, they’ll launch a pilot program next year to provide rent supplements and wrap-around supports to homeless veterans. They promise to “continue our work to reduce wait times and ensure veterans and their families receive decisions on their applications in a timely manner.” To do so they’ll invest an unspecified amount for hiring more caseworkers and adjudicators and enhancing innovative digital solutions. They also promise to make the programs more equitable to meet the needs of underrepresented veterans including women, LGBTQ2, racialized, and Indigenous veterans. And finally, they promise to recognize the valuable contributions of Canadian Armed Forces veterans who have served Canada in domestic operations such as wildfires, ice storms and floods.

They’ll do all of that while adding $45 million over five years to the Sexual Misconduct Response Centre and modernizing the military justice system, including implementing recommendations from the Third Independent Review of the National Defence Act led by Justice Morris Fish.

The price tag for the payout of the $900 million class-action lawsuit filed by military members who faced sexual misconduct doesn’t appear in the platform but applications for compensation close in November.

The Liberals want you to know that since 2015 they have restored the age of eligibility for OAS and GIS to 65 from 67, preventing 100,000 seniors aged 65 and 66 from plunging into severe poverty each year; provided a one-time payment of $500 during the week of August 16, 2021, to Old Age Security pensioners who will be 75 years of age or older as of June 30, 2022; increased the Old Age Security pension by 10 per cent for all seniors aged 75 and older, providing $766 over the first year to pensioners receiving the full benefit; and increased the Guaranteed Income Supplement (GIS) by 10 per cent for individual seniors, improving the financial security of about 900,000 vulnerable seniors.

In terms of overall new promises, they begin by stating that they’re going to move forward on their plan to boost the OAS by 10 per cent next year for seniors 75 and over. And perhaps responding to opposition criticism that they’re creating two tiers of seniors, the 75 and unders, and the 75 and olders, all seniors will see an increase in the GIS by $500 for single seniors and $750 for couples, starting at age 65. They plan to increase the CPP Survivors’ Benefit by 25 per cent. And expand the Canada Caregiver Credit into a refundable, tax-free benefit allowing caregivers to receive up to $1,250 per year.

The Liberals promise to work with their provincial partners to increase support that survivors — many of whom are women — receive by increasing the survivor’s benefit in the Canada Pension Plan and Quebec Pension Plan by 25 per cent. Widows and widowers will receive close to $2,200 every year.

Recognizing that some still want to work in their later years, they plan to introduce a Career Extension Tax Credit. The tax credit will allow people 65 and over, who earn a working income, to reduce their taxes. Seniors who earn a minimum of $5,000 at their jobs will be able to eliminate tax payable on a portion of their income and receive a tax credit of up to $1,650.