An interview with the Bloc Québécois’ Yves-François Blanchet 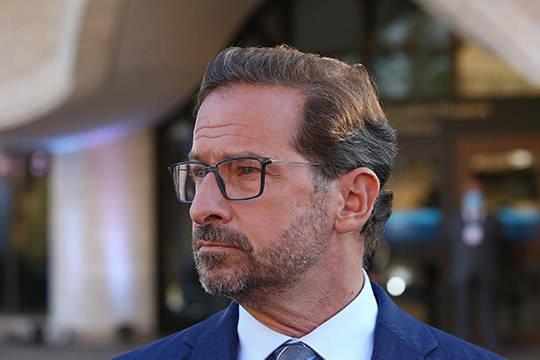 According to Bloc Québécois leader Yves-François Blanchet, his party is “fiercely opposed to creating discrimination between classes of seniors.”

The Bloc Québécois has said it wants to establish its own standards for long-term care. What kinds of standards will you establish and will be they be voluntary?

Regarding funding, should provinces be accountable for federal funding they get to establish such standards?

If Canada introduces a Pharmacare program that has superior coverage to the drug coverage currently offered to seniors in Quebec, what would your plan be to ensure citizens of Quebec get the best deal from federal Pharmacare?

This is a very interesting question, because it stems from a perception that is not ours. First of all, the government of Quebec already has a Pharmacare program. It’s not perfect. But it exists. Canada says, “Hey, we’re going to do what Quebec does, we’re going to have a universal Pharmacare program.” To the extent that Quebec already has its program, Quebec’s share of the Canadian funding should be given to the government of Quebec. This is the best way to ensure that Quebec will be able to improve its own program. The federal government does not have the authority to force Quebec to do this, but by giving more money for health or Pharmacare, or daycare, or whatever, the federal government is doing its fair share in Quebec’s jurisdictions, without imposing standards that we don’t have to accept. So an improvement in funding with our share of what is used for that program will be a good way for Quebec to improve the service offered to citizens.

Your party has said it would expect Quebec to be fully compensated, should a Pharmacare program be implemented. Is this still your position?

This is the position of all Quebec jurisdictions. Whenever a jurisdiction is Quebec’s, we expect that if the federal government decides to create a pan-Canadian program, often inspired by Quebec programs, it will give us our share of the funding so that we can create our own program in our own jurisdiction.

How exactly would you address the weaknesses of Quebec’s Pharmacare program, such as frequent shortages of critical medications?

I do not interfere with the government of Quebec’s choices. My goal is to improve the resources at its disposal, not to dictate its behaviour. I am sure they intend to improve their own system, and my intention is to give them more means to do so.

No, that’s not quite the nuance I would make. By working together freely, the federal government is able to have a negotiating position with the pharmaceutical [companies] that can be advantageous. It is a partnership that is, at the very least, commercial. Quebec buys drugs, the other provinces buy drugs and, by working together, we have a better purely commercial balance of power to get the best possible prices.

Do you see any contradictions or overlap between Quebec’s plan and a federally managed plan?

Obviously, this is why we hope that the federal government will not interfere in Quebec’s jurisdictions, in order to avoid overlapping, which is costly, time-consuming and administratively burdensome, and which is much more political than intended to improve services in accordance with the standards. Besides, who decided that a Canadian standard was better than a Quebec standard? Who said that the federal government is more competent than Quebec in matters of health or drug insurance, or anything else? Being a Quebecker is not a handicap. Being a Quebecker is not a demonstration that we are less competent than someone else. The proof: it is the federal government that copies Quebec programs, not the other way around.

The Canadian Armed Forces are having a reckoning with their culture, and we’ve seen many stories of the past months concerning military sexual trauma, harassment and their impacts. Many military and veterans systems are gender-blind, resulting in systemic biases, research gaps and increased rates of injury and illness resulting in medical release for women. What will your party do to make sure the military is a safe place for women to work, and what commitments can you make to women veterans, who are the fastest growing segment of Veterans Affairs Canada’s clients, yet are ill-served?

First of all, to make a clear and uncompromising statement of facts. For a woman, being in the Canadian army imposes constraints and risks that men do not face. In particular, the risk with regards to the men themselves. The military culture in Canada — as in many places in the world — is an opaque culture. A culture that allows little outside verification; the condition of internal practices. A culture that is very difficult to penetrate, yet it is necessary to do so. There has been too much unacceptable behaviour within the Canadian Forces that goes against the values of Quebec and Canada. Let’s start by making the statement of facts. Second, if an enquiry is to be held, it must have free rein. It must be done quickly, it must be absolutely free, it must have access to all the information from everyone, to get a real picture, because there is no solution without a real picture. Obviously, in the meantime, and this is what we are saying, the people who were involved in the alleged situations in the very particular context of the army should testify to the centres of power within the army and then it goes up to the minister.

How will transition or release from the military be improved on your watch? How can you simplify long bureaucratic processes for veterans applying for benefits, waiting for decisions, and transitioning to civilian life?

I think we can improve the support for people who leave the framework, which is perhaps both strict and reassuring, of the Canadian Armed Forces when they return to civilian life. And that includes much more supervision, because it’s an issue in terms of mental health, in terms of psychological distress, in terms of anxiety for people who return to a civilian environment that is very different from the one they have known, with, in effect, a heavy bureaucracy. So, counsellors with a range of skills funded from army resources, being independent and not under the orders of the army, seems to me an interesting approach to explore. I wouldn’t go so far as to say that, but I would certainly explore it.

The Liberals made a commitment to eliminate the Marriage Over 60 clause but so far, budgets have only offered money to fix the problem, with no specifics given on addressing the legislation that creates the problem. What will you do on this file?

I confess candidly that I do not know the constraints associated with marriages after the age of 60. This issue is, I imagine, very specific to the military.

Regarding OAS, your party proposed a 10-per-cent increase to OAS for all seniors as of age 65. Is that still your position?

No, no, no, no. The 10 per cent is the Liberals; it’s not us. We are talking about $110 a month, indexed to the time we made this proposal. In other words, we proposed to increase everyone 65 and over by $110 a month, starting in 2019. So we’re at $110 a month plus indexation since then. That’s still the proposal, with no discrimination based on age. So, no difference between [people aged] 65 and 75. That’s our proposal and it hasn’t changed. We’re very much opposed, on the one hand, to 10 per cent, which is very inadequate. Frankly, that’s $60 a month, and we’re also fiercely opposed to creating discrimination between classes of seniors. I can’t believe that a government that prides itself on being against all forms of discrimination is itself creating discrimination against seniors by establishing two classes. That is not acceptable. It’s really not acceptable. This is probably the issue that the Bloc Quebecois has been talking about the most since the 2019 election.

Will your party commit to keeping the sustainable, well-managed defined benefit pensions that are part of the compensation for federal public servants, the CAF and RCMP members as it has in the past?

We are against unilateral changes to rules that have been established and freely accepted. If people who were hired by the federal government were hired with rules regarding their retirement, we do not have the right to unilaterally change the rules at the time of retirement. This is unacceptable.

What other measures will you introduce to improve retirement security for more Canadians? Do you wish to add something to this interview?

We have put forward several elements, from automatic retroactive registration for the Guaranteed Income Supplement to high-speed internet in the regions as an essential service, because it breaks the isolation of seniors. The pandemic has hurt seniors more than anyone else. First, in terms of pure physical health, they were much more vulnerable. Second, the isolation created mental health problems and psychological distress and a significant loss of purchasing power, given the increased cost of living. We have fought hard for this, without achieving all the success we would have liked, especially with high-speed internet to break the isolation, which is a tool to accelerate this process. And, of course, there are the federal health transfers, which help retired people in particular, and this is where the health system will have to focus its future efforts. So, all this considered, we have a fairly comprehensive offer for seniors.

Thank you again for taking the time to present your ideas and electoral policies to our members.

Thank you very much, madam. My pleasure.