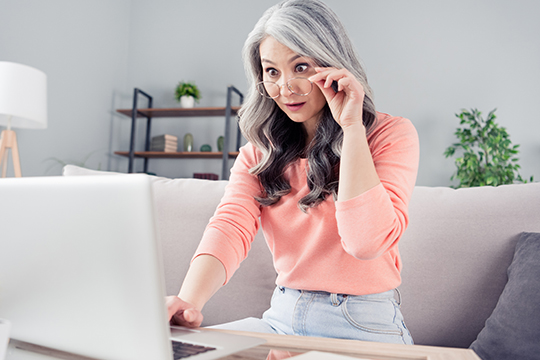 Our advocacy team receives regular calls and emails about a viral chain letter falsely claiming that the “Federal Benefit Payment” is a Ponzi scheme.

Since at least 2012, a chain letter has been floating around from email inbox to inbox. It usually starts this way:

The Canada Pension cheque is now (or soon will be) referred to as a “Federal Benefit Payment?” I’ll be part of the one percent to forward this.

The email then lists arguments and statistics that seem authoritative and almost always has the same line:

Instead, the folks in Ottawa pulled off a bigger “Ponzi scheme” than Bernie Madoff ever did.

What is this Ponzi scheme? According to the chain letter, the Canadian government is in the process of making off with large sums of Canadians’ “Old Age Pension”. The email uses a variety of misleading statistics (with each variation of the chain letter changing the numbers) to try to prove this.

They took our money and used it elsewhere. They forgot (oh yes, they knew) that it was OUR money they were taking. They didn’t have a referendum to ask us if we wanted to lend the money to them. And they didn’t pay interest on the debt they assumed. And recently they’ve told us that the money won’t support us for very much longer. But is it our fault they misused our investments? And now, to add insult to injury, they’re calling it a “benefit”, as if we never worked to earn every penny of it. Just because they borrowed the money doesn’t mean that our investments were a charity! Let’s take a stand. We have earned our right to our pensions. Demand that our ’MPs bring some sense into our government. Find a way to keep Canada Pension going for the sake of that 92 per cent of our population who need it. Then call it what it is: Our Earned Retirement Income.

If you receive this chain letter, you can be assured that it’s complete and utter nonsense.

While it’s difficult to pinpoint the origin of a viral chain letter like this one, there’s evidence that it started in the United States — using Washington in the place of Ottawa as the source of the Ponzi scheme.

The original email discusses the “Social Security check” instead of “Old Age Pension benefit.” It also references American politicians, with Canadian members of Parliament replacing them in later versions. Recent versions specifically name Justin Trudeau as the source of these changes and schemes — which is interesting, as he was not the leader of the Liberal party when these chain letters first started circulating.

The American origins of the chain letter explain some of the fundamental issues with it. For one thing, we have very different pension systems, and the chain letter simply superimposes one on the other, creating factual errors. The most obvious is that the United States only has Social Security, also known as Old-Age, Survivors, and Disability Insurance (OASDI). Canadians have two separate programs - the Canada Pension Plan (CPP) and the Old Age Security (OAS) program.

The CPP is a savings program — you and your employer contribute to the CPP and when you reach 65 (or 60 at a reduced rate), you are eligible to receive CPP benefits based on how much you contributed over the years. That money is held separately from the government’s operating revenues and the government cannot “borrow” or “take” those funds to use elsewhere, as the chain letter often suggests.

There’s also no need to worry about the finances of the CPP, as it’s being invested by the CPP Investment Board (CPPIB) and the pension fund is doing remarkably well. The Chief Actuary of Canada has said that the CPP will be sustainable for at least 75 years and this year, CPP Investments posted a 20.4 per cent return on investment for assets that are nearing a half-trillion dollars.

In short: no one has taken the CPP funds to use elsewhere, and the CPP is secure.

As for the OAS, it’s a benefit and has long been referred to as such. OAS is paid for from the federal government’s general revenues (your taxes) and it’s received by all Canadians over the age of 65 who meet eligibility criteria.

Some form of pension for those over 70 has existed in Canada since the 1920s, but the modern OAS has its roots in the 1951 Old Age Security Act. It introduced a universal flat-rate pension for people 70 and over with certain residency requirements. In 1965, the OAS was amended to lower the eligibility age to 65, and in 1967 the Guaranteed Income Supplement (GIS) was introduced for low-income seniors based on need. Over the years there have been a few small changes (such as full indexation and adding a spouse’s allowance) but it has remained largely the same for nearly seven decades.

OAS is not a personal investment. It’s not actually a pension. It’s not being renamed. There’s no account that is being raided for other expenses. There’s no Ponzi Scheme.

When you receive an email like this, take it with a healthy dose of skepticism.

These emails never have an author’s name attached. They make sweeping and vague statements, and they use statistics without sources. They encourage people to spread their false statements like “99 per cent of people won’t share this. Will you?”

If you want to fact check other chain letters, make use of websites like Snopes.com. It is a website where people share facts and details on viral emails and can help you verify what’s accurate and what’s fake. Snopes.com has a large repository of internet falsehoods and have a team of fact checkers who are trustworthy and cite their sources.

In our current world, with scams and false information readily available online (and too easily shared!) — be wary, be critical and seek advice from trusted information sources like the National Association of Federal Retirees.