At the Association’s 2016 Annual Members Meeting Volunteer Recognition Dinner in June, stories were shared honouring our exceptional volunteers for their commitment and dedication to the Association, its members and its overall mission and vision, as well as to their communities. And the award goes to.... 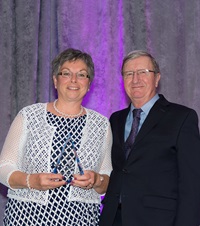 Anne Ashcroft, President, Saskatoon and District Branch, has been awarded theClaude Edwards Leadership Award for her exceptional leadership at the branch level and in support of national initiatives. Highlights of her contributions include: establishing a Member Recruiting Committee and developing a business plan to facilitate recruiting new members; leading her branch in hosting the local Candidates Forum during last year’s election; and demonstrating significant leadership in guiding her branch through the complex transition from a corporate branch to a charter branch in a timely fashion with minimal disruption. 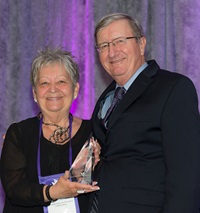 Françoise Dompierre, member and volunteer with the Outaouais Branch, has been awarded the Collaboration Award. Françoise was convinced that there was an opportunity for a collaborative initiative between the branch members and the local retirement residences, and played an integral role in bringing the parties together to explore the possibility of benefits for all parties. She worked tirelessly and closely with Allegro and the managers of the residences to negotiate a first time agreement between the parties. This agreement has resulted in valuable discounts for the branch members for their base rent and services offered by the residences. 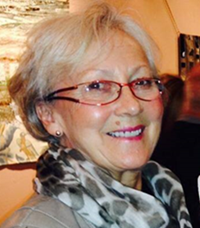 Patricia Goobie, Provincial/Territorial Advocacy Officer, South-East New Brunswick Branch, has been awarded the Volunteerism Award. Patricia volunteers for many not-for-profit organizations, such as the local Community Kitchen and the Rotary Club, and is a member of the Salvation Army Board of Directors. She was instrumental in finding land to build a church, was a member of the Board for Pine Grove Nursing Home and a founding member of the New Brunswick Coalition for Seniors’ and Nursing Home Residents Rights. Pat is also the First Vice President of the Moncton Hospital Auxiliary, organizes fundraising support for YWCA projects and works for the Jean S Irving Home for Women in Crisis as well as the Riverview Lions Club. 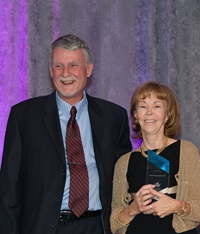 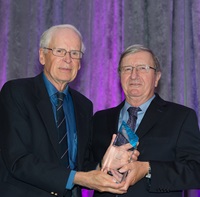 The Central Okanagan Branch was awarded the Innovation Award. The Branch launched a series of Learning Experiences for members on a range of topics of interest from computers to travel, insurance, wills and estates, health and wellness and home care options, using professionals in each field as speakers. As a result, the value of member’s membership in the branch increased and the branch experienced record attendance at the sessions and high interest by members.

The Saskatoon & Area Branch was the recipient of the Membership Recruitment and Engagement Award. The Branch developed a completely new recruitment strategy/campaign, and hosted several seminars to showcase the new campaign. They used a multi-prong approach launch. Different initiatives such as “Bring a Friend to Lunch”, advertisements in local community papers of upcoming events, incentive promotional draws for attending different initiatives, welcome packages, just to name a few.

The Calgary & District Branch received the Volunteer Support and Development Award. The Branch developed a Branch Recognition Awards Program to create a culture of effective commendation. Their Awards Committee reviews volunteer contributions, in terms of intensity and duration, and assesses the unique contributions provided by the candidates. Deserving volunteers are recognized at the Branch’s AGM.

Frank Bayne of the Kitchener Waterloo Branch was recognized for his outstanding commitment of volunteering with the Association for 35 years! His dedication is commendable.