An interview with the Green Party’s Annamie Paul 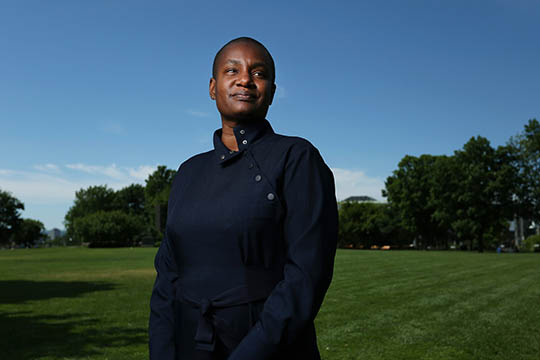 In our interview with Green party leader Annamie Paul, she highlighted that Canada “need[s] to prioritize long-term care.”

No, it doesn’t at all. We have been advocating, even prior to the pandemic, for deep structural reform to long-term care across Canada. It has been devastating to see so many thousands of long-term care residents die, many of them avoidably and one of them being my father during the second wave of the pandemic. So we believe the only thing that can make any sense about all of the senseless death and the humanitarian crisis that we saw in long-term care is for us to dramatically overhaul the system. We’ve called for emergency debates on this, we’ve called for the prime minister to convene a meeting with the premiers to talk about immediate and longer-term [solutions.] We want to see long-term care folded into the Canada Health Act. This is has been recommended by many health-care advocates. We want to see standards that are enforceable and that are not set on any voluntary basis. We need to prioritize long-term care, invest in it properly, ensure that anyone who’s in the business of long-term care is focusing on the residents. And we want to see profit taken out of long-term care.

I’m sorry to hear about your father.

15,000-plus people who died of COVID in long-term care, and many thousands more who died of neglect and things that were missed during that period because the facilities were understaffed and the workers were overworked. It really was a perfect storm. There are so many stories of seniors and other long-term care residents because something was missed and that was the case with my dad.

The Green Party has advocated for the development of a National Seniors Strategy that would support home-sharing plans to allow seniors to stay in their homes. If elected, what would that plan look like and when could voters expect it?

This is the time to be talking about exactly that. It’s the wakeup call, I hope, that we need to talk about a better way of allowing our seniors and the disabled to live with dignity through to the end. We know long-term care isn’t working; we know people are there because there’s no alternative in the community.

It’s time for the federal government to sit down with provincial counterparts and talk about real investments in community-assisted living, in putting in place the supports to allow people to age in place and to catch up with other wealthy countries. We invest about a third less than other OECD countries in community-assisted living. We should have been in deep negotiations with the provinces during this session of Parliament. We don’t believe we should have called an election when there’s so much of this kind of work to be done on an urgent basis. People in Canada can expect this would be one of our top priorities and we would make those investments as quickly as possible.

Would you commit to a date?

With all delivered speed and as someone who knows what the ultimate prices people pay when these things aren’t in place. The Green Party didn’t vote for the budget in April [because there was no urgency in long-term care policy.] For us, this is absolutely at the top of our list of priorities. We have to make sure we’re working hand in hand with the families of seniors and with the medical community and all of the other health-care advocates who have so much to offer in designing that plan.

Your party has committed to implementing a universal national Pharmacare program. What shape would it take and when will you implement it?

We supported the NDP private members bill on universal pharmacare. We don’t consider this to be a partisan issue. There was a very a well-considered report that said that it was time for us to have universal pharmacare. We’re also the only country that has medicare and doesn’t have universal pharmacare. It should have been passed in the last session of Parliament and certainly, we would introduce it ourselves or support any other party that introduces a bill that would bring it in within the first half of the next session of Parliament. Some elements could be rolled out first, while [we’re] negotiating other elements with the provinces. All I can say again is that it’s a top priority for us. If we were to form government, you could expect legislation right away, within the first six months or so.

What will your party do to make sure the military is a safe place for women to work, and what commitments can you make to women veterans, who are the fastest growing segment of Veterans Affairs Canada’s clients, yet are ill-served?

It’s an excellent question. Unfortunately, for reasons we never would have hoped for, [this has] come into the view of the public. We’ve said that anyone who is brave enough to step up and serve and to make that sacrifice deserves nothing but our thanks and respect and a safe environment to work in. We believed that the Deschamps Report [External Review into Sexual Misconduct and Sexual Harassment in the Canadian Armed Forces] had excellent recommendations in it. We are very disappointed that there has been no action and we see some things have gotten worse over the last six years. I’d say we don’t need another report. Madame [Louise] Arbour is extremely well respected and has a lot of experience, but I believe we have all of the recommendations we require to take concrete action. What we will always enact and push for, along with other opposition parties, is ensuring the recommendations in the previous report get enacted as quickly as possible.

How will transition or release from the military be improved on your watch? How can you simplify long bureaucratic processes for veterans applying for benefits and transitioning to civilian life?

Bureaucracy and red tape should never be an impediment to assistance to those who have made these tremendous sacrifices on behalf of all of us. I can’t give you the specific details, but you can expect to see more in our platform when we release it. We do have veterans in our shadow cabinet and we believe in getting people the help they need as quickly as possible with as little red tape as possible.

The Liberals are increasing OAS for those over 75 in 2022 and is sending one-time bumps this month. What does your party plan to do with OAS?

I think the one-time bump, while I’m sure it’s very welcome and many seniors certainly can use it, it’s quite cynical to be doing it during an election period and it was clearly timed [that way.] I’ve been speaking to seniors who don’t understand that it is a one-time bump and not something they can expect regularly. And we know that even with that $500, it’s not enough. There are stories of seniors who had to make major changes [with many unexpected expenses] during the pandemic. We would have wanted to see better supports earlier on and we’re certainly keen to see a reform of the pension system. There will be more details about that in our platform. One-time fixes won’t be enough.

Your party has supported the expansion of the CPP. What shape would that take?

With respect to pensions, we see the holes, gaps and cracks in the system and the ways in which people are being left without the supports they need to live life with dignity. With respect to CPP, we want to make sure it has the [funds] to meet the needs of those who rely on it. We want to see regulation of the investment board to ensure the money is invested wisely and we’re calling for an increase over time of the target income replacement rate, from 25 per cent to 50 per cent of income received during working years. We have seen how dramatically costs have increased so ensuring the replacement is something that’s livable is important. One of our key policies is the creation of a guaranteed livable income.

Will your party commit to keeping the sustainable, well-managed defined benefit pensions that are part of the compensation for federal public servants, CAF and RCMP members?

What other measures will you introduce to improve retirement security for more Canadians?

We all have seen that a piecemeal system is not working. People continue to be left out. We need something that will provide that floor for everyone. There will be some who don’t need it and others that do. The guaranteed livable income is a solution to that. [An adjustable rate] would ensure no one ever falls below a certain amount. The NDP and Liberals at their conventions in April voted to support a guaranteed livable income and we had 50 senators sign a letter calling for it. This can make a big difference.