The power of volunteers 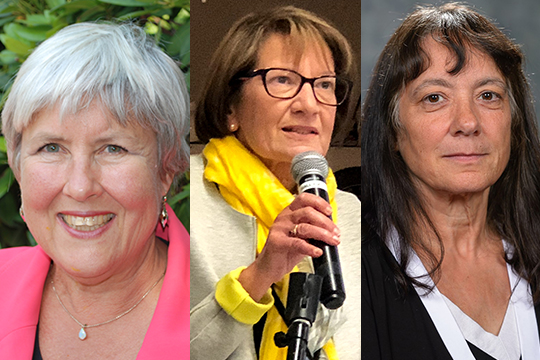 To get politicians thinking about seniors’ issues, Federal Retirees’ Reach 338 project aims to lobby members of Parliament from all 338 federal ridings in Canada. So how does one speak with representatives of every region of our vast country during a pandemic, when town halls and in-person meet-and-greets are now prohibited? If you answered “by telephone and online meetings,” you’d be correct.

But the B.C./Yukon District also has a secret weapon: Its volunteer advocacy program officer has a background in public health epidemiology, and she puts those skills to excellent use.

Leslie Gaudette spent her working years with the government of Alberta and Health Canada in Ottawa. So not only does she understand the scary realities of the COVID-19 epidemic, she can transfer those skills to an outreach effort to speak truth to government, one politician at a time.

“I really enjoy it,” she says. “It allows me to use all my professional background that I have working on chronic diseases and little bits of workers compensation, health and safety and benefits — the Social Security system for Canada — and it all just ties together. It’s my hobby.”

The Association’s national office had tasked all of its 79 branches with Reach 338, with advocacy program officers co-ordinating regional responses. Gaudette liaised with executives from all 15 B.C. branches and they targeted 18 of the 42 B.C. MPs and the single member representing all of Yukon. Her team members succeeded in reaching two-thirds of their elected federal representatives, in a year when they had to adapt by learning online communication methods, and when long-term care catapulted to the top of the issues list, supplanting pharmacare and seniors’ equity issues from the front burner.

“We want national standards for long-term care that are developed by a federal-provincial process so both parties buy in,” Gaudette says. “I think sometimes people get scared of standards. But really, you have to think of it as an accreditation process that any hospital would have.”

In concert, there’s a push to increase home care, which is less expensive than long-term care, has better outcomes and better respects the dignity of the aging.

Deb Nilsen, who finished her career at the Canada Revenue Agency, is president of the Prince George branch. Her northern part of B.C. avoided the virus in the early days. Then, on Dec. 12, Jubilee Lodge long-term care centre announced an outbreak. The building was home to 66 individuals and the virus has now infected 60 people at the home, including 48 residents.

“In 3 ½ weeks, COVID has taken the lives of 12 residents in the long-term care home,” Nilsen says. “It's horrible. That's 25 per cent of their residents.”

Nilsen praises the efforts her vice-president, Rose Bowker, who helped the group reach all three MPs in its geographically massive northern ridings: Conservatives Bob Zimmer and Todd Doherty and NDP Taylor Bachrach. Bachrach was elected in 2019 and listened carefully, but the Federal Retirees team already knew the two Conservatives well from previous outreach efforts and found them especially receptive.

Gaudette’s role is to act as a conduit between the national and branch offices, sharing information and keeping everyone on the same page. She says it’s fun, and that the national office has provided great materials that MPs really respond to.

“I think they appreciate talking with us because we have some well-thought-out positions and policies on things they need to understand, and if they understand them, they can do their jobs better.”

Marg Smith does it with a smile

Advocating for seniors’ issues is becoming more crucial as the Canadian population ages. Statistics Canada projects that by 2031, 23 per cent of Canadians will be seniors, similar to Japan, the world's oldest country. Representing a well-educated, middle-class section of that group, Federal Retirees has the clout to be a strong voice for seniors in Canada in the years to come.

As a member of her executive committee, Marg Smith co-ordinates advocacy activities for the Nanaimo and Area Branch. This branch was designated to start the Reach 338 program early in 2020.

“We have a really good group of people and excellent support from our president and branch executive,” says Smith. “We share responsibilities and we have a few laughs. If we can't do this with a laugh and a smile on our faces, it's not worth doing.”

Smith, who holds degrees in law and political science, spent much of her career in Ottawa working in what was then called the Parliamentary Research Service, part of the Library of Parliament.

“One thing I would like to add — I just want to say thanks to Leslie Gaudette, who has been absolutely wonderful and so, so helpful,” says Smith. “And to the advocacy team at national office, because they certainly have produced some very useful materials for the branches to use. Without their work, we couldn't do this or do it as well as we’d want to do it.”

Writer Mick Gzowksi, based in Aylmer, Qué., has been inspired to look for more volunteer opportunities.