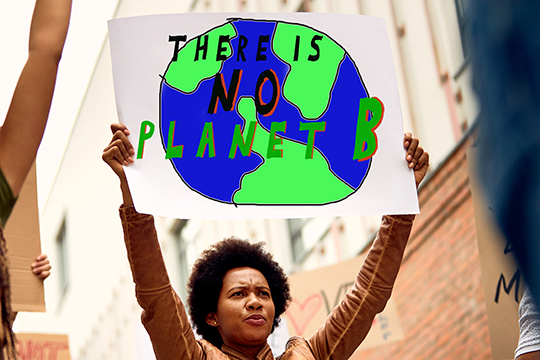 As consumers and governments move to climate-conscious policies, Canada’s pension investors are doing the same.

Members often wonder how their hard-earned pension funds are invested and with more coverage of corporate wrongdoing and evolving knowledge of the impact of human activities on the world around us, some are increasingly worried their money is funding companies that don’t share their values.

At the top of the list of worries are climate change and corporations with less-than-stellar social and governance records.

Our members’ funds are invested by an arm's-length independent organization called PSP Investments, which has environmental, social and governance (ESG) principles as one of its key pillars of investment strategy. Each year, it publishes a responsible investment report that outlines the fund’s approach to ESG-conscious investing. This includes physical climate-risk assessments of all real assets, understanding the sustainability of private companies’ supply chains and ensuring strong governance practices.

The rest of the pension investment industry is following suit. In November 2020, a group representing eight of the largest pension plans in Canada (some of the biggest in the world) who oversee a total of $1.6 trillion, came together to call on companies to standardize environmental, social and governance disclosure to help investors make decisions and manage risk. That includes the CEOs of the Canada Pension Plan Investment Board (CPPIB), Public Sector Investment Board, Ontario Teachers’ Pension Plan, the Alberta Investment Management Corp., the B.C. Investment Management Corp., the Ontario Municipal Employees Retirement System, the Healthcare of Ontario Pension Plan and the Caisse de dépôt et placement du Québec. To them, this is not a moral imperative. Rather, it’s a means to manage financial risks for their investors.

Ignoring the effects of something such as climate change can lead to financial consequences. For example, take hurricanes and flooding, two natural phenomena that have been occurring increasingly frequently since 1970 because of climate change. These climate-related catastrophes can have a huge impact on investments in manufacturing and infrastructure.

Consumer movement away from carbon-emitters, such as coal, oil and gas producers, can influence the price of the goods those companies produce and lead to financial losses for their investors. Peabody Energy, a large coal company, has seen its market capitalization decline by US$20 billion in the last decade, while US$20 billion flowed into ESG funds and other values-focused exchange-traded funds in 2020 (as of September 2020).

The short story: investments in companies and even industries that don’t take into consideration ESG simply no longer make financial sense.

On the flip side, there are gains to be made by investments that take climate change seriously. Surer bets now include investments in carbon sinks such as forestry and agribusiness or manufacturers and operators of renewable energy assets. As consumers and governments move to more climate-conscious policies, investors are there to meet them. While the motivation may be different from that of the average climate change activist, the result is similar — that environmental, social and governance principles are being taken seriously.

Unfortunately, not everyone has taken this same view. In the United States, the Trump administration, through the Department of Labor, introduced a new rule that restricts fiduciaries of retirement plans from purchasing ESG-focused funds. The Trump White House’s stance was that ESG investment strategies sacrificed returns and promoted goals unrelated to financial performance, a position that has been contested by several studies. The rule became effective on Jan. 12, 2021, though it’s expected that the Biden administration will reverse this decision.

In Canada, Cowichan-Malahat-Langford MP Alistair McGregor introduced Bill C-231, which would enshrine the need for the CPPIB to follow ESG principles. Right-wing media entities have been wringing their hands over it, but the CPPIB already does this by choice. And if its last financial reports are any indication, the results speak for themselves. The fund is sustainable for at least 75 years, according to its most recent assessment by the chief actuary of Canada. Bill C-231 was introduced in February 2020 and remains at second reading.

This article appeared in the spring 2021 issue of Sage magazine as part of our “From the Pension Desk” series, which offers answers to our members’ most common questions about their pensions. While you’re here, why not download the full issue and peruse our back issues too?