Our home and native blossoms 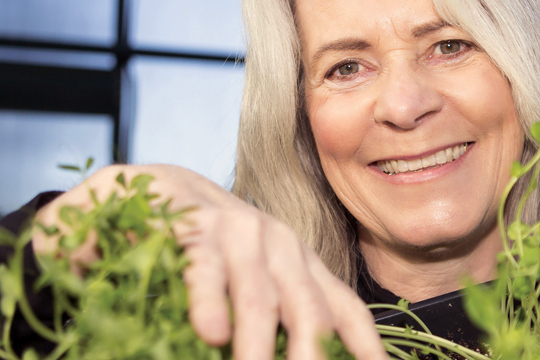 Gardening expert Donna Balzer had her eyes opened to native plants when a group of tourists she was travelling with discovered Canada’s humble foxtail and fell in love with it. Credit: donnabalzer.com

Spring is coming. Sometimes it doesn’t feel that way in the depths of winter, particularly for the many who couldn’t escape to more southerly climes this year, but it’s true. And with that in mind, we turn our thoughts to gardening.

For each province and territory, we offer at least one plant, flower, shrub or tree that will grow well, won’t require much maintenance and, in many cases, is a plant native to the province or territory in question. Native plants, after all, are something we sometimes overlook. Gardening expert Donna Balzer remembers travelling in Alberta with some foreign gardening enthusiasts. At one point, along the highway, they drove by some foxtail — something Canadians see all the time and don’t really prize. The tourists were awestruck. “They told me ‘We have not seen such a pretty plant,’” Balzer recalls. “Sometimes a native plant can be considered a weed if it grows too widely. But if you look at foxtail, it really is a pretty decorative grass.”

Territorial agrologist Randy Lamb describes his home garden as “a jungle that blends native and domesticated plants, including nectar sources for my honey bees.”

For the most westerly territory, he suggests the Saskatoon berry, which, despite its name, is also native to the Yukon.

“Even in Yukon, not many people realize the Saskatoon is a native plant,” he says. “It forms a hedge with abundant blooms in the spring and produces small fruit to harvest for jams, cobblers and pies.” The fruit is full of fibre, nutrients and anti-oxidants.

Because of its shape, it provides nice structure in the back of a flower bed or as a wind break for a home vegetable garden. And if you don’t harvest the fruit yourself, you will be feeding the local bird population — another worthy pursuit.

Marie York-Condon, an amateur gardener in Yellowknife, says it’s hard to grow perennials in this territorial capital, but she does have a few recommendations for plants that have come back yearly since she moved there in the 1970s.

“The Alberta wild rose is our front hedge,” Condon says. “They were here when we moved in, and they’ve continued to grow well.”

So named because it’s the provincial flower of Alberta, the deciduous shrub grows between one and three metres tall. Indigenous people make tea and salad from the leaves — maybe looking to benefit from the plant’s high levels of vitamins A and C. The petals are also edible and pretty on a plate. 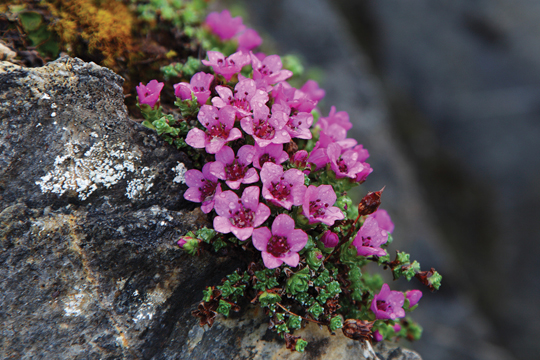 The purple saxifrage, or Saxifraga oppositifolia, serves as the territorial flower of Nunavut.

Inveterate Iqaluit gardener Joanne Rose recommends the territorial flower — the purple saxifrage. With a small and intense magenta flower, it’s perfect as a ground cover-type plant in gardens. The challenge is to find the seeds. Rose collects them in the autumn, keeps them in envelopes over the winter and then plants them in the spring.

Rose also suggests Arctic sorrel, which has edible leaves and grows well in the territory, as well as Arctic poppies, whose buttery-yellow flowers dot the Nunavut tundra.

Rose plants these perennials “as soon as I can make a line in the ground,” she says, adding that in Nunavut, that means mid-to-late June.

Rose, a Federal Retirees member who worked for Fisheries and Oceans Canada, and her husband, Bert, have lived in Iqaluit since 1981. Bert, who was dean of Nunavut Arctic College, says he’s known as the man who brought dandelions from Saskatchewan to the territory and admits that wasn’t popular with all of his neighbours. 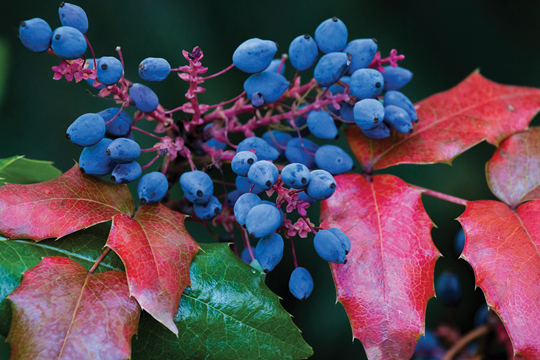 The Oregon grape, or Mahonia aquifolium, is a striking evergreen shrub that produces dark bluish-black berries.

Donna Balzer, who spends some of her time in B.C., has a favourite B.C. plant — the Oregon grape.

“It’s a ground cover and it looks like holly,” she says.

The plant has the advantage of starting to bloom in February, something B.C. plants can manage due to milder weather. And, it offers a rainbow of colours — from its evergreen leaves in winter and its red leaves in the autumn to its yellow flowers in the spring and its purple berries at harvest. In addition, the plant is a huge draw for hummingbirds, offering B.C. gardeners a full-time view of the tiny birds. 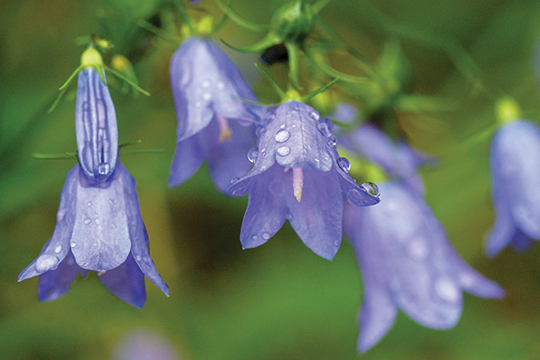 The harebell, or Campanula rotundifolia, produces its pretty violet-blue, bell-shaped flowers in late summer and autumn.

For Alberta, Donna Balzer recommends the aspen, partly because it surrounds the city of Calgary, where she lived for a long time. It’s also easy to plant and grows well.

“It starts as a single seedling,” Balzer says. “People are getting away from lawns and these are great for that purpose. They don’t get too tall — maybe 16 to 19 feet — so they stay nicely in scale with properties.”

Balzer suggests buying small ones because they’re easier to plant and they’ll double in size in the first year.

“When you plant the small tree, make an effort to amend your soil in the whole growing area,” she says. “Mulch the area with bulk mulch — it will gradually improve the soil around it.”

If you’d rather a flower than a small tree, Balzer recommends the delicate harebell, which grows wild in the province.

William Hrycan’s recommendation for a Saskatchewan plant is the blanket flower.

“The plant is easy to care for, showy, has a long bloom season and is an excellent food source for native bees, butterflies and other insects,” says Hrycan, a landscape architect and horticulture editor of a quarterly magazine called The Gardener for the Prairies.

The blanket flower is native across the grasslands and aspen parklands of Saskatchewan, so it’s drought-tolerant and resists insects and diseases.

“It is happiest when not pampered,” he says. “The only real maintenance required is to trim back plants in the spring, once the snow melts and before spring growth resumes. Flowers can be dead-headed to extend blooming season, but this is not required.”

Lisa Renner, a master gardener in Manitoba, recommends the blue vervain, which is a native plant that grows to about two feet tall, has square stems and variegated leaves. Renner grows hers in her garden, near some sunflowers, though they grow wild in the province, dotting its highways.

Blue vervain, also known as wild hyssop, is a traditional medicinal herb — its leaves, flowers and roots have all been said to treat various ailments, according to the website Gardening Know How, which also says the plants are pest-and disease-resistant and low-maintenance.

For Canada’s largest province, the obvious choice is the trillium, Ontario’s provincial flower.

Mark Cullen, expert gardener and author, stresses it’s important Ontarians not harvest the plants from the wild to transplant at home. He says any full-service garden centre will have seedlings or small plants.

“It’s easy to grow if you have shade,” Cullen says. “It’s a woodland plant; you can’t put it out in the blazing sunshine.”

Trilliums tend to bloom during the first two weeks of May and will last up to 10 days in mild weather and they’re reliable perennials in compost-inspired soil. He suggests planting them under a tree so they have the shade they want.

Larry Hodgson, who goes by the name “The Laidback Gardener” and is an author and frequent contributor to gardening magazines across North America, said his first thought was Quebec’s blue flag iris, which he said was a “tough and easy-to-grow perennial.” But, (spoiler alert) since we already had the iris for Newfoundland, he also offered some other ideas, including swamp milkweed, ostrich fern, wild ginger and foamflower.

“All are easy to grow, attractive and adapt to a wide range of conditions, even well into the North,” Hodgson says. 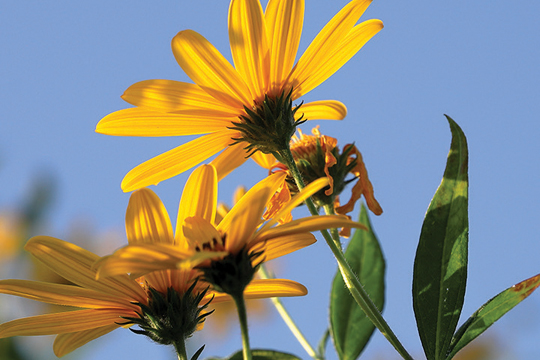 The Jerusalem artichoke, or Helianthus tuberosus, is a sunflower plant popular for its knobby edible tuber. It’s also commonly referred to as a sunchoke.

The Jerusalem artichoke may be the most oddly named root vegetable in the world — it bears more resemblance to ginger, yet it’s named for the artichoke. And it has nothing to do with Israel, either. But it is delicious, hard to kill and has a pretty yellow flower that looks like a giant daisy. The plant will grow as tall as six feet and isn’t fussy about the soil in which it grows.

Samuel de Champlain discovered the root, also called a sunchoke, when he was exploring the Maritimes.

Grow-your-own-food advocate Glen Auton says you get the best of both worlds if you grow Jerusalem artichokes for food because you can harvest the blooms for a nice bouquet and that will help the plant put more emphasis on growing the root.

Auton warns they can be invasive, so stay on top of them if you put them in a garden with other plants. They’ll also grow well in deep pots. Just make sure you start with at least two plants.

Partridge berry, also known as lingonberry, is a plant that grows wild along the eastern coast of Nova Scotia and on the island of Cape Breton and produces a berry smaller, but similar in taste, to the cranberry.

According to Glen Auton, who lives outside Halifax, the “incredibly tough” plant can handle temperatures as low as -40 C.

Auton grows his at the base of an apple tree, but they will also grow in a pot. Again, one needs two of these to make sure they produce something edible.

He says he bought small plants and just stuck them in the ground.

“They might get two feet high at the most,” says Auton, whose gardening know-how can be found at maritimegardening.com. “They’re more of a low-lying bush.” 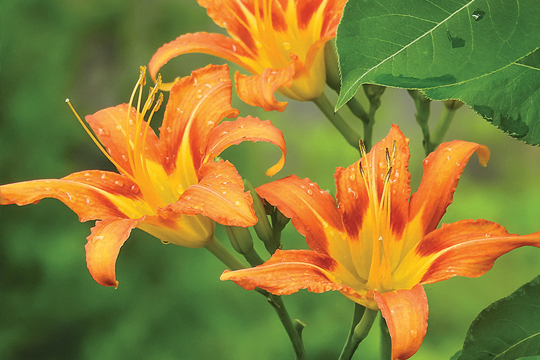 Daylilies, from the genus Hemerocallis, are known for their beautiful flowers and have been popular among horticulturists and gardeners for hundreds of years.

“The violet manages to smother weeds, is fairly easy to control and super-easy to dig up and plant in other places,” says Willison, a gardening author who regularly appears on CBC radio’s Maritime Noon to answer gardeners' questions. “Whether in bloom with purple or white flowers, or out of bloom with its attractive leaves, it holds interest from early spring to late autumn.”

“I think of daylilies as the workhorses of a garden,” she says. “They’ll grow in a variety of places, some tall and some short, [in] different colours, and [they’re] helpful in holding soil. It is true that each bloom lasts about a day, but new flower buds replace the ones that have faded. You can also eat the flower buds, or sprinkle the petals on a salad.”

“All of these seem to appreciate moist conditions and survive difficult growing conditions,” she says. “Of course, with a little tender loving care in a home garden, they can grow twice as tall as their wild height. Their flowers last a long time and their colours are rich and vibrant.”

Jennifer Campbell’s garden is limited to annuals and herbs on her downtown balcony. But, if she can get there this year, she’ll try some of these ideas at family cottages in New Brunswick and P.E.I.