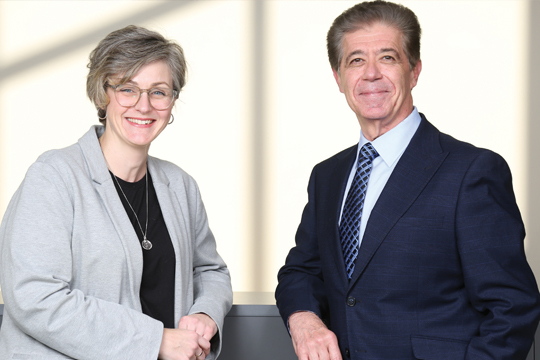 Sayward Montague, director of advocacy for Federal Retirees, and CEO Anthony Pizzino were among the team that negotiated hard for the renewed PSHCP. Photo: Dave Chan

Helen Fontaine can’t ever remember a time when she needed health coverage and didn’t have it. Given that, the 93-year-old federal retiree read about the upcoming changes to the Public Service Health Care Plan with interest, and maybe a little trepidation. But after a good read, she sees the changes as positive. There’s more money for vision care, increased coverage for hearing aids — one of which she’ll soon have to replace — improved acupuncture coverage and the introduction of coverage for injectable lubricants to treat arthritis-related joint pain.

“Anything that I’ve ever needed has been there for me,” says the enthusiastic widow, who worked as an administrative clerk with Transport Canada in Winnipeg for decades. “I’m really grateful for all of the people who were involved in getting this done.”

For his part, Pierre Tardif, of Sherbrooke, Que., wrote to thank the members of the committee who negotiated the renewal of the PSHCP.

“If our members take the time to look at the changes and improvements, they will see that our representatives have listened well [during] the consultations,” Tardif said. “For me, removing the need for prescriptions for paramedical services is a marked improvement, because when the pain is there, you want to react and not try to meet your doctor to get a prescription... I really appreciate the increase in coverage of many services.”

Tardif’s late spouse of 49 years was a federal retiree and as such, he can remain a member. Tardif himself worked in educational administration for most of his career.

“The improvements in vision care, hearing aids, hospital level coverage will greatly aid aging retirees,” Dinelle wrote. “I was also happy to see that low-income pensioners will be eligible for the relief program. With the cost of living being so difficult for most of us, these changes are so welcome. Thank you, advocacy team, for working so diligently for the most vulnerable.”

Dinelle is 61 and retired six years ago from Transport Canada after a long career in administrative services with Fisheries and Oceans, mostly on the legal services end. She only learned of the work Federal Retirees does when she retired.

“It’s well worth it for the small amount it costs to be a member,” she says.

After in-depth consultations with nearly 9,000 members (a full 19,000 received the survey with 9,000 responding), Federal Retirees began talks on the renewal of the PSHCP in 2019, but Treasury Board and the Treasury Board Secretariat only started negotiating formally in 2021, with COVID causing many disruptions. In 2022, things sped up and approval took place in the autumn.

One of the goals of the renewal was to implement measures that would help the plan manage escalating costs. With the PSHCP’s annual costs having tripled since 2006, pensioners’ contributions/premiums have continued to escalate. The changes in the renewal were necessary to keep benefits sustainable and affordable over the long term.

Mandatory generic substitution, prior authorization, limits to amounts and frequency of pharmacy-dispensing fees, rules on the content of compound drugs and a slight increase in out-of-pocket amounts for drug expenses are some of the compromises Federal Retirees made to preserve and enhance members’ stated priorities, including an increase in benefit amounts for vision care, massage, osteopathy, naturopathy, chiropodist/podiatrists services, hearing aids, nursing services and hospital coverage.

“Protecting our members’ hard-earned pensions and benefits is Federal Retirees’ No. 1 job and after more than two years of hard work, the pensioner representative and our Association staff have secured a deal,” says CEO Anthony Pizzino. “We’re very pleased to have meaningful enhancements and improvements across nearly every benefit category, and we’re grateful for our members’ trust throughout this process.”

“Any negotiation has compromises and no benefits plan will be able to meet every plan member’s needs 100 per cent of the time, or offset every health-care expense,” Montague says.  “Some of these compromises have been tough, and we know our work in representing our members’ interests isn’t done. But for now, it’s been a privilege to support the pensioner representatives and to have finally arrived at something that will make a real difference to the health and well-being of so many of our members.”

Plan members should ensure their contact info is up-to-date with the Association and Sunlife/Canada Life, and have early conversations with their care providers about these changes and what they will mean.

Your new PSHCP by the numbers

This article appeared in the winter 2022 issue of our in-house magazine, Sage. While you’re here, why not download the full issue and peruse our back issues too?