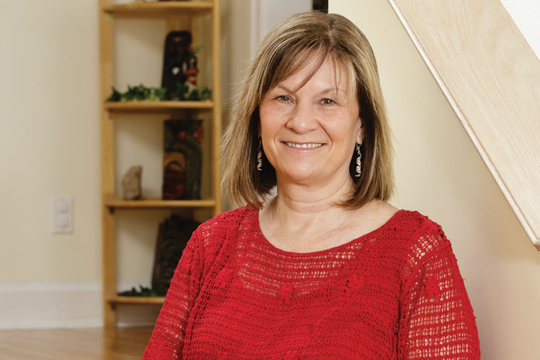 As a military doctor, Dr. Karen Breeck knows the health challenges unique to female members of the military.

Sitting in a restaurant in downtown Ottawa, Dr. Karen Breeck still has to pause and compose herself when she’s asked about her transition from military to civilian life 10 years ago. One phone call was all it took. Suddenly, her 20-year career as a flight surgeon with the Canadian Armed Forces (CAF) was over. “I’m not sure I want to talk about that,” she says. “It was bad. I wish I had access to all the great programs that are available now for military members.”

Canada has begun to improve its military transition and veterans program in recent years and it is better now than when Breeck left the military. But there are still gaps in the programs available when it comes to the particular needs of women veterans.

Women first entered the Canadian  military decades ago but things changed significantly in 1989 when the government opened most military occupations to women. The number of female members of the armed forces began to rise and women started doing jobs that in the past had been reserved for men. In recent years, those early waves of women have been joining the ranks of Canada’s veterans.

Just as the military had to adapt to women, making changes to things like equipment designed for men, now it’s Veterans Affairs Canada (VAC) that is being called on to adapt transition programs and provide aid to women. Some of the special needs are medical — incontinence from carrying  heavy knapsacks, exposure to environmental toxins, infertility, military sexual trauma, damage from equipment such as pilots helmets that work well for men but are so heavy they strain women’s necks.

Others are more psychological or societal — homelessness, suicide, lower incomes than their male colleagues, lack of counselling groups specifically for female veterans.

A paper prepared for the Library of Parliament by analyst Isabelle Lafontaine Émond says two groups have lower employment rates and bigger drops in income once they leave the military: those who are medically released and female veterans. “Three years after they were released, women had a total income 21-per-cent lower than what they had made in the military, while men had exactly the same income,” she wrote. “Average earnings three years post-release were 51-per-cent lower for women, compared with a 34-per-cent decline for men.”

“Researchers studying gender mainstreaming in the military believe that gender-blind policies result in discriminatory outcomes and make life more difficult for women than it has to be.”

The paper says different approaches are needed for women and for men. “Researchers studying gender mainstreaming in the military believe that gender-blind policies result in discriminatory outcomes and make life more difficult for women than it has to be.”

Maya Eichler, an assistant professor at Mount Saint Vincent University in Halifax, who has researched the transition from military to civilian life, says gender blindness is one thing the old veterans system and the new veterans charter adopted in 2006 have in common. “We’re trying to address these unique needs of female veterans but both VAC and CAF and DND (Department of National Defence) have operated as if gender is not a relevant category for so long there’s a long legacy to overcome here in terms of thinking about female veterans‘ specific needs.”

In the absence of action from the military and government, the charitable sector has stepped in to fill some of the gaps, says Eichler. “The first programs we saw for women were, for example, through the Veterans Transition Network. They were one of the first groups to offer female-specific services. And, of course, there has been a development of peer support with groups as well but that wasn’t government driven — that was from the charitable sector.”

But Eichler says things have begun to change. “I think we’re seeing more interest in the subject mostly because of [former Supreme Court of Canada justice Marie] Deschamps’ report, for example. That has really brought the issue of the experiences of female veterans and of military sexual trauma survivors to the forefront, so the military has been taking the issue more seriously. We have also seen more female veterans organizing and creating their own peer-support groups, and then we have seen a lot more research attention to the issue.”

Among those paying more attention is the current Liberal government, which has set a goal of increasing the percentage of women in the military from the current level of 15 to 25 per cent by 2025. It says it’s aware of the problem and wants to improve things for the women who have served their country.

Alex Wellstead, press secretary to Veterans Affairs Minister Lawrence MacAulay, says the government planned a Women Veterans Forum in May to hear from women serving in the military and female veterans about the problem of gender-specific injuries and how they can result in inequality in their care and the benefits they receive.

“The focus of the Women Veterans  Forum is to hear directly from female veterans about their experiences and  to get their ideas on how to best develop policies and programs that meet their specific needs,” Wellstead explains.  “The main goal is to leave the forum  with concrete ideas on how to move forward: how does VAC continue to better engage with the female veteran population? What are the priorities for female veterans that can be worked on  in the short, medium, and long term?  While VAC programs are designed to  help the unique needs of all veterans,  we recognize that there is more to be  done for female veterans.” 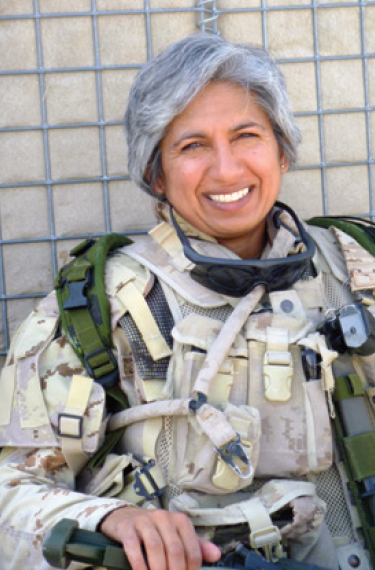 Col. Nishika Jardine is one of those who has benefited from the military’s new transition program, which gives members of the military a six-month period to help move from military to civilian life. That is very different from past practice, she says.  “It was not something that was ever  spoken about. People just left the military, they were out within 30 days and they were just gone.”

One of the earliest female graduates of  the Royal Military College, Jardine, 55, served with the army’s Royal Corps of Mechanical and Electrical Engineers  and had 37 years of service, including a  year in Afghanistan. She was medically released in May. “I’m broken, I suppose. Military service seems to be harder on women. I think it just breaks our bodies more.”

Six months before her release, Jardine was transferred to a transition centre that allowed her to remain as part of the military family while she prepared for civilian life. During that time, Jardine remained at full pay and had the option of going to school, finding a job, or to “do whatever I needed to do to get myself started on my new civilian life. I had a lot of support. The transition centre was excellent. I had a nurse case manager who guided me through all the medical stuff and how to connect in with Veterans Affairs and get my disability claims in. I had a lot of help for that.”

Jardine is looking for a job as an executive or as a leadership coach but says the transition program could be improved when it comes to helping people like  her translate their military experience into civilian CVs.

Finding a civilian doctor after years of being able to rely on military doctors is another challenge, notes Jardine. “Just at the point where my medical needs are ramping up because I’m being released for medical reasons and I’m now middle aged and I need a family doctor, I can’t find one and it is so difficult to go around to doctor’s offices and basically beg.”

“If the government could do one thing for military people, it would be to help them find a family doctor.”

Medical care is also on the mind of  Capt. Kate Pentney, a pilot who will  leave the military in the fall with spinal  cord damage as a result of her service.  “I would like someone to manage my care. I would like a single point that manages all of my specialists, all of my prescriptions, all of my care and make  sure that I don’t OD or things like that.”

Pentney has been told her condition  will get worse with time and has been modifying her home to prepare for the future. However, she says she could use more help with childcare. “I think Veterans Affairs is going to take really good care of me. They know that I’m broken. They know that I’m coming.”

However, Pentney says the transition program isn’t as well adapted as it could be for people in her situation. She says the program focuses on preparing for civilian jobs while she knows she is not likely to work again. “It has been rough.” 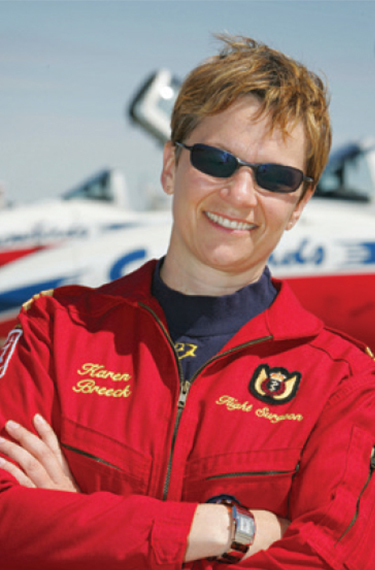 Former Snowbird Karen Breeck says
the government has moved to address
individual problems for female veterans
but there needs to be a more systemic,
top-down overhaul of veterans
programs. Photo credit: Ken Lin

As a military doctor, Breeck, who joined the National Association of Federal Retirees in 2009, has seen first-hand some of the health challenges that are unique to female members of the military. “Women, statistically, are being hurt and injured at a higher rate than men. We’re being medically released at a higher rate than men. It’s taking longer for VAC to make decisions about claims from women.” Among the problems are infertility, miscarriages, stillbirths, stress incontinence, chemical exposure, repetitive injury, musculoskeletal problems, military sexual trauma, and post-traumatic stress disorder (PTSD).

For women who need counselling, Breeck says female veterans either end up lumped into groups with male colleagues or told to join groups designed for the civilian wives of military officers. However, female members of the military don’t really fit into either group. “We know peer groups matter. We know group therapy matters. We know most men, for group therapy, do better in mixed genders. Women do better in women-only environments. They need the safe space.”

The full article appeared in the 2019 summer edition of Sage magazine.