Rounding up budgets: Yukon and Quebec 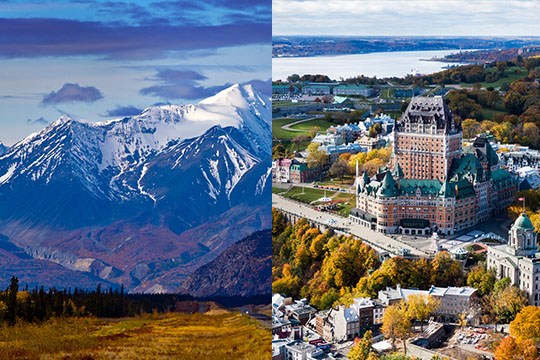 In this fourth instalment of our “Rounding up budgets” series, budget season continues with the governments of Yukon and Quebec releasing their fiscal plans in early March 2020. Read on to learn more about these territorial and provincial budgets and how they relate to Federal Retirees’ priorities.

On March 5, 2020, Yukon’s territorial government tabled its 2020 budget, which estimates spending at $1.62 billion and projects a surplus of $4.1 million. The surplus, which sees the budget balanced a year earlier than the government had promised, is the result of higher revenues from income taxes and transfers from the federal government, which account for approximately 85 per cent of the territory’s revenues. The amount collected from personal income taxes is on the rise as a result of Yukon’s increasing population and income growth, not rising income tax rates.

Premier and Finance Minister Sandy Silver noted in his budget address that “[t]his year’s budget is not about flash, it is about substance… For the past three years, our government has been working hard to put Yukon’s finances on a sustainable path and create an environment for Yukon’s people and economy to thrive.”

A signification part of the budget is allocated to the Department of Health and Social Services, with spending set at $449 million for 2020-2021, an increase of $19.3 million or 4.5 per cent. This will help the territory meet the demands of a growing population and ensure that Yukoners have access to the health services and infrastructure they need. Continuing care facilities, home care, respite care, palliative care programs and community day programs will receive $83.4 million in funding. Of that, $500,000 will go toward hiring five additional staff in the province’s Home Care Program.

Spending on the following projects over the next four fiscal years are also outlined in the budget: completion of the secure medical unit at the Whitehorse General Hospital, with between $14 million and $21 million earmarked for the project between 2021 and 2024; replacement of the Mayo Health and Wellness Centre, with approximately $15.5 million to $21 million in spending between 2023 and 2025; renovation of the Carcross Health and Wellness Centre, with about $3 million to $4.5 million allocated to the project between 2022 and 2024; and $1 million to $2 million for the development of additional in-patient beds at the Whitehorse General hospital in 2023-2024.

Interim leader of the Yukon Party, Stacey Hassard, is calling this budget an election year budget given the elevated levels of capital spending. He questions the surplus stating, “the only reasons there’s a surplus, a small surplus, is because the federal government came through with an excess of $25 million at the last moment, so I think it’s a little unfair for the premier to say that this government has been fiscally responsible and has actually produced a surplus.”

Kate White, leader of the NDP, notes that many things are missing from the budget, including money to address climate change. Aside from the $1.5 million for renewable energy projects, the territory has no funds allocated to fight climate change, which should have been a priority for the government considering the climate emergency declared in the territory last year.

On March 10, 2020, the Legault government tabled its second budget which sets out $118 billion in spending, a 5.1 per cent increase from last year, and projects a $2.7 billion surplus. The surplus is being reinvested into the Generations Fund, the fund dedicated to repaying the province’s debt.

Quebec’s 2020 budget is also the first in Canada to take into consideration concerns surrounding COVID-19, with Finance Minister Eric Girard saying that, due to strong public finances, the province’s economy will be able to manage any financial impacts from COVID-19. “It’s important to understand where we are starting from,” he said before tabling the budget. “The foundations of the Quebec economy are extremely solid, and the performance of the Quebec economy is really in a good position.” If needed, additional funds will be made available to address increased costs related to COVID-19. However, this could bring the budget into a deficit given the balanced budget.

Presented as a budget “of the future,” it includes $6.7 billion in investments to encourage the growth of the green economy, including transit investments, subsidies for new electric cars and replacing fossil fuels for home heating.

Both education and health funding are receiving boosts, with education spending set at $1.5 billion over the next six years. On the health-care front, the Coalition Avenir Québec (CAQ) government is budgeting $5.4 billion over the next six years for health and social services, including $1.1 billion for this fiscal year. This money will go toward improving access to health and social services ($488.5 million), enhancing services for seniors ($190 million), providing targeted support to youth in difficulty ($190 million) and increasing services that address specific needs like enhanced care and services for people with disabilities ($199.8 million).

Under the banner of improving access to health and social services, the province is spending $3.1 billion over the next six years to: improve primary care services by adding staff, including more nurses and other health professionals, and expanding the scope of practice of specialized nurse practitioners and pharmacists; providing groundbreaking treatments, such as chimeric antigen receptor T-cell (CAR T-cell) therapy for leukemia patients, which improves specialized cancer care; and enhancing access to specialized medicine through investments in medical and technological breakthroughs, adding beds, and increasing staff.

The budget includes measures aimed at improving care for older Quebecers, with $624 million in funding over the next six years. $384 million will go toward improving home care and hiring workers to help provide more hours of care and services at home. Another $100 million will be spent to help improve the quality of services in residential and long-term care facilities (CHSLDs), with emphasis on improving the quality of food served in these facilities as well as catering to the needs and preferences of residents. In addition to the 900 additional long-term care spaces announced last year, over the next two years, another $140 million will be spent to add an additional 900 beds and spaces in long-term care facilities.

The government will continue to combat the social isolation of older Quebecers by further developing social geriatrics and taking steps to increase accessibility of health-care services for socially isolated and vulnerable older Quebecers, as well as enhancing quality of life through early at-home intervention.

The CAQ is also earmarking $532.2 million to enhance the refundable tax credit for caregivers.  As of this year, the tax assistance provided by this refundable tax credit will be higher, available to a greater number of caregivers and more streamlined. In 2020-2021, caregivers will obtain $102.3 million more tax assistance through this credit, with $56.4 million in enhancements for the 82,000 individuals currently receiving the tax credit and $45.9 million to extend eligibility for the tax credit to caregivers of a spouse under the age of 70 and caregivers of a person with whom they have no family relationship. These changes will open the tax credit to 21,000 caregivers of spouses under the age of 70, 6,000 caregivers having no family relationship with the person receiving care and another 3,000 people as a result of the streamlining changes. The 2020 budget also includes funding to continue improving caregivers’ quality of life, with $68 million over the next six years to open five more Maison Gilles-Carle respite homes in the province. More details are available in Section D, Part 2.1 of Quebec’s 2020 budget plan.

The government will invest $261.4 million by 2024-2025 to increase mental health initiatives. This will allow the roll out of local services tailored to different clienteles.

The CAQ government is also working to bring health and social services into the digital age faster, with investments of $80 million over the next two years to optimize information systems in health institutions, improve data security and develop applications.

Some critics suggest that, while the budget hails itself as a budget of “the future,” it is out of sync with the present as it mostly ignores the threat of COVID-19 and the market downturn the global pandemic induced.

Liberal finance critic Carlos Leitao called the lack of specific funding to address the effects of the coronavirus “hazardous.” “The finance minister is minimizing the threat of an economic slowdown,” Mr. Leitao said. “The signs have been there since the start of the year, the North American economy was slowing down. It’s very dangerous,” he noted.

Manon Massé, spokesperson for Québec Solidaire, was unimpressed, calling the budget “greenwashing” and claiming there was little actual new money being invested.

For its part, the Fédération de l'Âge d'Or du Québec (FADOQ) pointed out that the budget does little to address the costs of long-term care, especially when many seniors are “ruining” themselves financially to secure a place in a CHSLD.