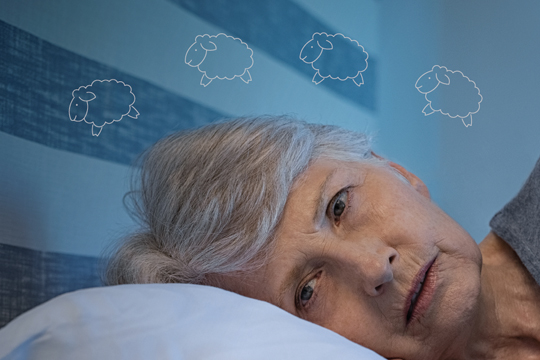 Anxiety and stress play into a poor night’s sleep, but there are other factors, too, and unfortunately, age is one of them.

You’re retired. You have a pension. Chances are, you’re no longer burdened with a mortgage. So, why don’t you sleep soundly every night and awaken perky as a puppy? Simple. You’re no longer a puppy.

Our sleep patterns change as we age, according to Charles Samuels, medical director of the Centre for Sleep & Human Performance in Calgary. Babies require the most sleep, children less, adolescents a lot and adults, including seniors, seven to nine hours of shuteye.

Unfortunately, while we usually have more time to sleep once we’ve retired, our sleep “stability” also diminishes, and we don’t always get the deep rest we need. The aches and pains of an aging body, a tendency for noises to awaken us easily and needing to urinate more often because of bladder and prostate problems can all disrupt seniors’ sleep stability. Stress is another disturber, Samuels says. “It raises the state of arousal physiologically, and when you raise the state of arousal you put at risk the brain’s ability to normally sedate and enter into a sleep state.”

All these disruptors mean we need to distribute our sleep a bit differently than we once did, Samuels says.

He encourages napping to help with that distribution and nurture sleep health.

“Many people resist it because it’s ‘non-productive’ or ‘I’m lazy.’ If you’re retired, you’ve earned the right to nap.”

Has the pandemic murdered sleep?

As if we seniors didn’t already have enough to contend with on the sleep front, then the pandemic arrived.

A wide-ranging study at the Royal Ottawa Institute of Mental Health Research is showing just how seriously COVID-19 has affected the general population’s mental well-being, including soaring rates of anxiety and depression. The study has also identified sleep disruption, itself a contributor to troubled mental health, as  a consequence of the pandemic.

Early in the pandemic, Rébecca Robillard, who leads clinical sleep research at the Royal, led an online survey of 5,500 Canadians aged 16 to 92. Her published findings show a jump in insomnia during the first wave of the pandemic, with one in two survey respondents reporting trouble sleeping. That’s double the pre-pandemic rate of one in four Canadians reporting dissatisfaction with their sleep in a 2018 Statistics Canada study.

Like other sleep experts, Robillard distinguishes between acute and chronic insomnia (her study focuses on the former).

Acute insomnia is often triggered by a stressful event such as the death of a loved one and lasts up to three months.

Chronic insomnia, ignited by a stressful situation, poor sleep hygiene or other causes, means you have trouble falling or staying asleep at least three nights a week for three months or more. About one in 10 Canadians suffer from chronic insomnia, according to the Centre for Sleep & Human Performance.

Acute insomnia, which appears to occur more often among women than men, can become chronic.

On the plus side, Robillard says many of us should eventually bounce back from pandemic-related sleeplessness. “I want to refrain from stressing people more. If you’re having trouble sleeping right now, don’t freak out; it’s part of the game.”

What happens when we don’t get enough sleep?

Acute insomnia can lead to everything from moodiness to compromised immunity, while chronic insomnia’s possible effects range from depression and diabetes to stroke, according to the Centre for Sleep & Human Performance. The Mayo Clinic tacks on other cheery outcomes, including slowed reaction time and a higher risk of accidents.

Adds Robillard, “When you struggle to sleep, the emotional parts of the brain get disrupted versus the more rational part. So, we’re struggling to make sense of our experience during the day and to regulate our emotions. All to say, we’re not best-equipped to face daytime challenges... when we haven’t slept well.”

Sleep and memory are also connected, although the relationship isn’t always clear cut. Sleep allows what we’ve learned during the day to move from short-term to long-term memory, explains Thanh Dang-Vu, Research Chair in Sleep, Neuroimaging and Cognitive Health at Montreal’s Concordia University.

“Insomnia does affect people when they’re trying to perform cognitive tasks. Insomniacs in general tend to have a poorer memory than non-insomniacs,” he says. At the same time, “Not all insomniacs will be affected with a poor memory” and while less sleep adversely affects brain health in some people, it may not be universally the case.

He also cautions that while sleep health should be pursued and chronic insomnia treated, worrying excessively about sleeplessness creates anxiety, which can produce its own problems, including self-isolation and less activity.

Getting a good night’s sleep

Non-medical sleeplessness remedies range from a bowl of porridge before bed — apparently even more efficacious if sprinkled with nutmeg — to dosing yourself with CBD oil.

Alas, there’s little evidence these or many other strategies work.

An old trick is to pick a random number, say, 289, and count backwards. Hitting zero rarely happens and the tactic generally succeeds. Says Samuels, “The brain wants to sleep; the mind won’t let it. What you do with that number game is distract the mind and the brain does its work.”

He, like others, counsels avoiding alcohol to bring on sleep, in part because alcohol reduces the amount of time we spend in the restorative REM stage of sleep.

Samuels is also adamant that digital devices disrupt sleep because of the light they emit and our interaction with them arouses us. “Screens are bad. End of story. TVs are fine, but screens are bad and there’s a host of research that supports that.” To foster sleep, Samuels says shut off devices by 6 p.m.

Others, including Robillard and Dang-Vu, recommend regular exercise, sunshine (which helps regulate our circadian rhythms) and a daily bedtime and wake-up routine. Over-the-counter melatonin, a natural hormone that helps regulate our sleep-wake cycle, can be helpful, but check with your doctor first.

Sleeping pills, both prescription and non-prescription, carry their own risks as we age, including constipation, dizziness and an increased chance of falling if we get up in the middle of the night.

For those suffering from chronic insomnia, CBT-I (Cognitive Behavioural Therapy for Insomnia) looks like the best bet. Offered by sleep clinics, it helps identify and change the beliefs, worries and behaviours that create insomnia.

In the end, Samuels advises the seriously sleepless to contact their doctors. “Patients who are struggling with their sleep should get help, and there is help.”