COVID and the cottage 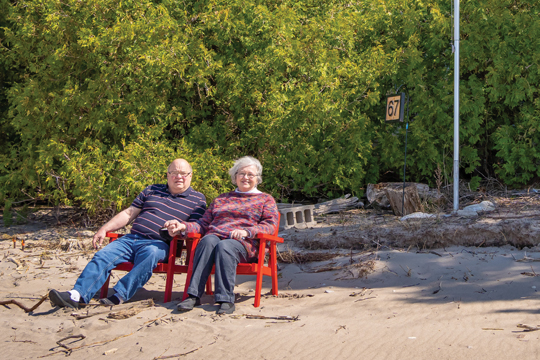 Retirees have realized that life at the cottage isn’t just quiet and calming, it’s also far more COVID-free. Many are setting themselves up permanently at their one-time summer retreats.

Maggie Munoz was just five years old when her mom pulled her out of kindergarten and headed to their family’s cottage on Lake Huron.

It was 1955, there was a polio outbreak in Ontario, and a Toronto school was not an ideal place for a young child to be as a contagious virus circulated in the community.

“There were other children whose families came from Toronto as well,” Munoz recalls.  “I remember that we had to be very careful at the beach. We knew we weren’t going to be back in school until after Thanksgiving that year. We spent four and a half months there.”

Sixty-five years later, history repeated itself. As the COVID-19 pandemic upended life, she and her husband, Gus, left their condo in Waterloo, Ont., and headed to the same cottage on Lake Huron. In normal times, they split their time between the two places in the summer. With regular barbecues, happy hours, guest speakers and card games in their social condo building, there were plenty of reasons for the retirees to spend time in Waterloo, too.

“Since COVID happened, there was nothing to keep us here, so we basically moved up to the cottage and stayed,” says Munoz, who, along with her husband, joined the National Association of Federal Retirees in 2014. Last year, they spent eight months at the lake, staying well into November. After spending the winter at home, they moved back to the cottage again in late March.

Munoz says in a condo they can’t walk out their back door, sit in the garden or watch the birds. Instead, there’s an elevator to contend with, and busy sidewalks to navigate with a walker — neither of which is ideal in  a pandemic.

Their cottage, however, certainly is. It’s a safe refuge, a place she’s come to since she was three months old. And even though there were none of the usual barbecues or golf tournaments, and socializing involved waving to others walking on the beach, Munoz says just seeing friends from a distance — some of whom she’s known since Grade 3 — and knowing someone else is thinking about you helped with the isolation.

“This is a place I have loved my whole life,” she says. “Being near the water is very important to me. It’s really peaceful.”

Their son lives in Vancouver and has made it clear they’re not to visit until the pandemic is over. Their other holiday destinations are also a no-go, Munoz says.

“We might as well be in our happy place.” 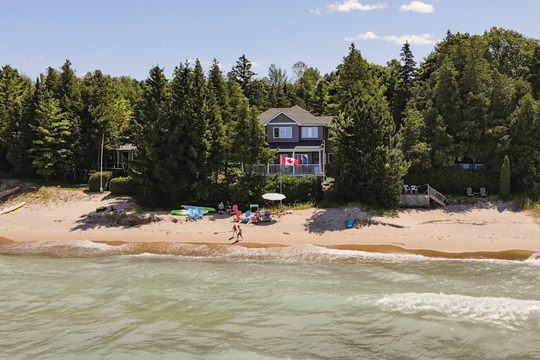 This drone photo of the Munoz cottage captured it in full swing one summer.

Across the country, retirees have flocked to their cottages to ride out the pandemic, while countless others have been busy searching for a happy place of their own away from home.

"From coast to coast, the line between primary residence and recreational property is blurring,” says Phil Soper, president and CEO of Royal LePage. "The trend began last summer when the option of travelling abroad was taken away.”

Royal LePage’s 2021 spring recreational property price forecast predicts the aggregate price of a house in Canada's recreational regions will increase 15 per cent this year to $502,730, as demand continues to rapidly outpace inventory.

The recreational property markets in Ontario and Atlantic Canada are expected to see the highest gains, rising 17 per cent, while Quebec and British Columbia’s recreational markets are forecast to increase 15 per cent and 13 per cent, respectively.

“In the 50 years I’ve been doing this, I have never seen anything quite like it before,”  says Rich Osborne, president of LandQuest Realty in New Westminster, B.C. “It’s a whole new ballgame.” 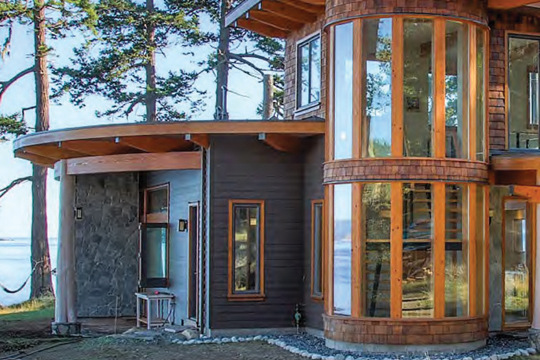 Realtor Rich Osborne recently sold this Sidney Island, B.C., property, shown in this photo. The husband is a corporate executive and the wife is a teacher — both were looking for a quiet retreat. Photo : Rob Parsons Construction

A year ago, his company, which focuses on the rural real estate market, averaged 2,000 visits a day on its website. Now there are 4,500. On Sidney Island, between the mainland and Vancouver Island, he’d normally sell three or four properties a year.

This past year he’s sold 20. The common thread is people fleeing big cities. Osborne just sold a ranch to a woman from Ontario who saw it online, jumped on a plane and bought it.

“They’re coming from all over the place. It’s pretty universal — everywhere here the market is strong. People want to have a place to get away to.”

On Nova Scotia’s south shore, realtor Bobbi Maxwell says 80 per cent of her buyers are from other provinces and many are buying sight unseen.

“I haven’t physically shown a property to anyone from Ontario because they haven't been able to come,” she says, noting plenty more buyers are from as far west as B.C. “But 60 per cent of my buyers are from [Ontario] now. They're selling everything, retiring and living the dream.”

After 20 years away, she returned to the province in 1994 and sees the draw for others. The winters are getting milder, there are white sandy beaches and often the water looks Caribbean blue. The pace is slower and real estate dollars go further.

“I feel like I’m on vacation here all year,” Maxwell says. “It’s why people want to retire here.”

Instead of the coast, retirement brought  Dan Strasbourg north, back to Kirkland Lake, Ont., where he grew up.

“When I was a kid, I couldn't wait to get out of northern Ontario because I didn’t have the appreciation at the time for the beauty, the tranquility, the peace or seeing the stars at night,” he says.

But after spending his career working in Toronto, he retired in 2018 and moved home to be closer to family and friends he’d known since childhood. “I got really tired of spending my days in an office. The city had served its purpose.”

He bought his off-grid cottage north of town that fall, but didn’t open it the following summer as he was preoccupied with getting his mother into long-term care. But last year during the pandemic? “I spent the entire summer there and it was heaven. I didn't want to leave.”

If it were winterized, he wouldn’t have left, content to have just the squirrels and blue jays for company. It’s not that Strasbourg doesn’t like people, but in 2009 he contracted the H1N1 virus and nearly died of congestive heart failure. He now lives with chronic heart disease, so COVID-19 poses a real risk.

“I feel lucky I had a cottage I could run to and not worry about bumping into people,” he says. “I felt free there. It not only helped keep infection at bay, I got to enjoy life. I didn’t have to stay indoors. In a lot of ways [I] was able to escape the pandemic.” 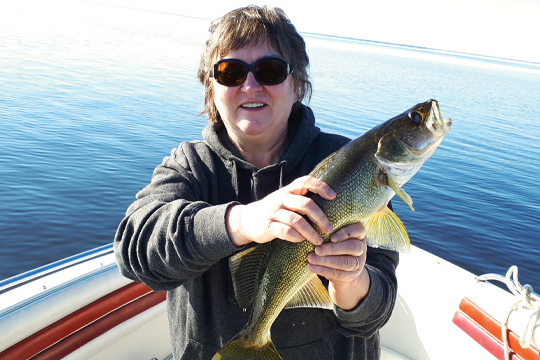 Lafrenière-Noël often goes fishing on Lake Nipissing near her cottage.

For Carole Lafrenière-Noël, this year has also brought things full circle. She grew up playing with her cousins at the family cottage on Lake Nipissing near Sturgeon Falls. This past year has been spent doing exactly the same thing. In all, she has 25 cousins with homes and cottages on the lake. “I don’t even have to go looking for fun,” she says. “It finds me.”

Although she lived and worked in Ottawa for 40 years, the cottage remained a fixture in her life. This past winter, however, was the first she’d spent there. She thought it would be cold and grey, but in addition to fishing and snowshoeing, her husband’s purchase of a new snowmobile kept them outside and exploring areas they could never reach by boat. She’s convinced the fun now has him aging in reverse.

“Once you play together as kids, you remain kids,” Lafrenière-Noël says of her relatives. “We were cautious. We saw people outside. People were concerned about COVID, but not stressed out as they were in bigger cities.”

She thinks that’s why so many people are making their home at the cottage or buying one to escape to. “As they retire, they’re coming back home, they’re reconnecting. In a small town like this, you quickly meet up with your old high school friends.”

An Association member since 2019, Lafrenière-Noël spent her career working in communications for the federal government, and now retired, volunteers with the economic development committee in Sturgeon Falls. In recent years, it has worked to market itself as an ideal bedroom community, courting seniors and retirees to encourage them to move to the area.

West Nipissing Mayor Joanne Savage, who is also a federal retiree, says they have reaped the benefits of those efforts in the last year, as, in addition to people buying homes, she has seen a trend of cottage owners coming back and making it their year-round home. Just four hours from Toronto and linked with good highways and high-speed internet, the area has hospitals, care homes, shopping, as well as a low cost of living, And, it offers access to every outdoor activity imaginable in the woods and on the water.

"Our location is so ideal. We have some beautiful jewels in our backyard,” Savage says. “As far as balance, you couldn’t ask for a better place.”

No one has to convince Lafrenière-Noël. These days, she and her husband come back to Ottawa for errands and medical appointments, then rush back to the lake. She doesn’t see that changing any time soon.

“Our house will get lonely, but so be it.”

They also used to travel south for the winter, but she expects from here on, they’ll travel for a few weeks in the fall and then spend the rest of the year at the cottage. For her, it’s a feeling, as well as a lifestyle.

“Once you love the lake, it’s part of who you are,” Lafrenière-Noël says.

“We don’t need to go to Costa Rica. We’ve got it right here at home.”