Rounding up budgets: Saskatchewan and Manitoba 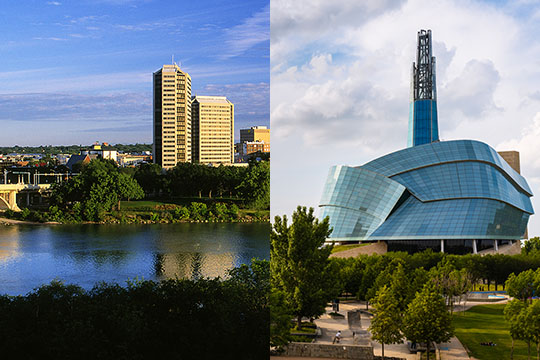 The fifth instalment of our budget round-up series comes as governments across the country are acting to limit the spread of COVID-19, adapt our health-care system to respond to the pandemic, and support the economy, businesses and people dealing with the repercussions of COVID-19. As Canada braced itself for the impact of COVID-19 in mid-March, provinces and territories altered their budget spending in response. A few also opted to release estimates instead of full budgets, concluding that spending on COVID-19 measures would fundamentally alter their government’s finances over the next weeks and months. In this post, we look at the spending plans released by Saskatchewan and Manitoba in mid-March 2020. Read on to learn more about these provincial budgets and how they relate to Federal Retirees’ priorities.

Saskatchewan is the first province to release its spending plan since governments at all levels began taking action to limit the spread of COVID-19 and introducing measures to help people deal with the health, financial and other impacts of the global pandemic. Given the uncertainty this is creating, the Saskatchewan government decided to forego releasing a full budget and instead released its 2020-2021 estimates – a spending plan without revenue forecasts – on March 18, 2020. The Saskatchewan Party government felt it was important to release the estimates now, so that crucial spending in health care, education and other areas could proceed. Revenue projections will be added later in the year through the release of a formal budget.

The estimates set out $14.15 billion in spending for the fiscal year and indicate that the province has $1.3 billion in cash reserves. The provincial government was initially poised to deliver a balanced budget with a small surplus, but it now acknowledges that it will go into a deficit position as a result of COVID-19.

In introducing the estimates, Finance Minister Donna Harpauer noted, “[t]his is an unprecedented and challenging time in our province, our country and the world... We are all feeling the impact of the COVID-19 pandemic and our government's first priority is the safety and health of Saskatchewan people." Minister Harpauer reassured Saskatchewanians that "[t]he province is in a strong fiscal position to provide further resources as required to address the health and safety of Saskatchewan people through this crisis.”

The province’s debt sits at $22.2 billion, a $1 billion increase from last year. The government decided to take on more debt in 2020-2021 to ensure the province has the funds that will be needed to deal with the effects of COVID-19. Approximately $200 million that was slated to be used to pay off debt is being transferred to the province’s cash surplus for this fiscal year.

The estimates allocate $5.77 billion in funding for health care, a 3.8 per cent boost over last year. This includes a $3.74 billion grant to the Saskatchewan Health Authority, part of the province’s plan to support Saskatchewanians through the COVID-19 pandemic, to fund doctors, nurses and other health-care professionals working on the front lines.

The Saskatchewan Party government is spending an additional $20 million to address surgical wait times and provide 3,700 more surgeries across the province.

The estimates allocate $15.7 million to further fund the construction of the previously announced long-term seniors care facility in Meadow Lake, which will add 72 beds to the province’s total. Another $8 million will be spent to add 36 new acute care beds at Saskatoon’s Royal University Hospital. Approximately $2.3 million will go toward creating 100 community-based long-term care beds in Regina and Emerald Park. An additional $15 million is outlined in the estimates for the planning and preparation of the previously announced $300-million Prince Albert Victoria Hospital. The estimates also indicate ongoing planning and scoping for hospitals in Wyburn and Yorkton.

The province is earmarking $4 million for diagnostic imaging equipment, including $2 million to fulfil the provincial government’s commitment to provide Melfort with a new CT scanner. They are also allocating $3.6 million for improving eHealth infrastructure.

The Saskatchewan Cancer Agency is receiving an additional $18.4 million this fiscal year, an increase of 10%, for a record total funding of $196.4 million.

The estimates also outline $3.4 million for the launch of the new Saskatchewan Housing Benefit. The benefit will help make housing more affordable for individuals or families who require rental support.

The provincial government is also providing a $400,000 boost in funding to the Vaccine and Infectious Diseases Organization (VIDO) to support construction of a new vaccine manufacturing facility. A VIDO team is currently working with colleagues and organizations across Canada to develop and fast-track the testing of a COVID-19 vaccine.

The opposition parties have reacted to the incomplete nature of the budget, criticizing the government for releasing spending estimates without revenue projections. Many also say the estimates do not do enough to address COVID-19. Ryan Meili, provincial NDP leader, called the estimates a failed response to COVID-19 and said the $10 million financial support package outlined by the government a few days later is still not enough. He believes the provincial government has failed to take urgent action to deal with the pandemic and is calling on the province to take immediate steps to help reduce the impact of COVID-19 and flatten the curve.

NDP health critic Vicki Mowat is taking the rise in heath care spending with a grain of salt, stating “I think they would have liked for it to be an election budget, but with the oil crash they just couldn’t do it.”

On March 19, 2020, a week later than initially planned, Manitoba’s Progressive Conservative government released its 2020 budget. The budget was tabled later than expected as a result of procedural delays from the Opposition NDP, who were hoping to block the government’s legislative agenda.

Given the significant changes that have occurred between the date the budget was first set to be tabled, March 11, and when it was actually tabled, March 19, the government also released a supplement to the budget outlining Manitoba’s fiscal response to COVID-19.

The budget estimates $17.9 billion in spending and projects a $220 million deficit, leaving the province’s debt at around $26 billion. However, the government anticipates that reduced economic growth resulting from COVID-19 could lower government revenues by between $160 million to $682 million and that health costs could rise between $50 million and $200 million.

The budget injects $300 million into the province’s rainy-day fund and the accelerated rollout of this process will bring the fund’s total to $800 million over the next month. The province plans to shift another $72 million to the fund by the end of the fiscal year. It also doubled the emergency expenditures budget, bringing it to $100 million. The province notes it received $18 million in federal funding related to the virus and anticipates more funds over the coming weeks and months.

In presenting the budget, Finance Minister Scott Fielding reassured Manitobans that the province is well placed to handle the impact of COVID-19. “Budget 2020 takes measures that serve as the foundation for the Manitoba government’s fiscal response to the fast-evolving public health and economic challenges posed by the COVID-19 pandemic,” Fielding said. “Budget 2020 sets aside the largest amount of money in Manitoba history for emergency expenditures, and Manitobans should be reassured by this unprecedented level of fiscal resilience and flexibility to quickly deliver the resources required to respond to any emergency.”

While the province’s response to COVID-19 is what many were focused on during the budget’s release, the PC’s fiscal plan also concentrates on reducing the provincial deficit, incremental fee reductions and infrastructure spending. Regarding fees, some of the changes the province is introducing include a 10% decrease in vehicle registration fees, beginning with renewals after June 30, 2020; the elimination of probate fees; the elimination of PST for tax preparation starting October 1, 2020; the elimination of PST for the preparation of wills; and the increase of the personal income tax exemption to $9,809. The promised elimination of PST on home insurance and salon services over $50 will be implemented next year. The changes in 2020 will be offset by tax increases on cigarette and tobacco products as well as price increases to gas, diesel, natural gas and propane. On March 26, 2020, Premier Brian Pallister announced that the six per cent PST reduction outlined in the budget, which was set to go into effect starting July 1, 2020, would not be happening this year.

The province still plans to implement the new provincial carbon tax scheme, also known as the Green Levy, on July 1, 2020. It will introduce a flat $25 per tonne carbon tax that will not increase each year, meaning Manitobans will pay less than the federal carbon tax plan.

The budget also allots $101 million to the Lake Manitoba and Lake St. Martin flood outlets projects, which are awaiting approval from the federal government.

Funding for the Department of Health, Seniors and Active Living rose by $157 million for a total of $6.8 billion in 2020-2021, the highest level in the province’s history. This includes $1.8 billion in infrastructure spending for projects like the Health Sciences Centre master campus plan and the Saint Boniface Hospital redevelopment, which will cost $592 million and $88.5 million, respectively.

The PC government earmarked more than $250 million for the implementation of the Provincial Clinical and Preventative Services Plan, which will fund improvements in rural and northern healthcare, digital health supports and infrastructure investment in project and program delivery. The Plan will enhance access to local health services, provide care closer to home, meet the needs of communities in areas such as prevention, screening and management of chronic diseases and prevent 2,500 patient transports to Winnipeg over the next 5 years. In turn, this will help reduce wait times in Winnipeg hospitals as it will shift 21,000 days of care away from the city’s acute care facilities.

The PC’s are spending an additional $10 million to increase the numbers of cataract and joint (hip and knee) replacement surgeries and reduce wait times. They are also investing in renal replacement therapy for both in-centre dialysis and at home hemodialysis programs. An additional 22-station dialysis unit is being developed within the $75 million Diagnostic Centre of Excellence at the Health Services Centre, the completion of which is expected later this year. This unit will support up to 132 patients.

An additional $188,000 is earmarked for the Cadham Provincial Laboratory to respond to population-wide outbreaks.

On the housing front, over the next five years, the province is shifting away from ownership of social housing. The Manitoba Housing and Renewal Corporation will move from being a housing provider to a housing funder and regulator. The PC’s indicate this is being done to make social housing more sustainable, with Pallister noting that units that have already transitioned to the private sector have seen better maintenance and more available housing stock.

Opposition reaction focused heavily on the inadequacy of the budget to address COVID-19 concerns. NDP Leader Wab Kinew stated that, even with the week-long delay, the government incorporated almost no new measures to increase health care funding or to improve the financial security of Manitobans affected by the pandemic. He also criticized funding for health care in general, saying that “if you take into account simple things like population growth and inflation, there's no new money for health care."