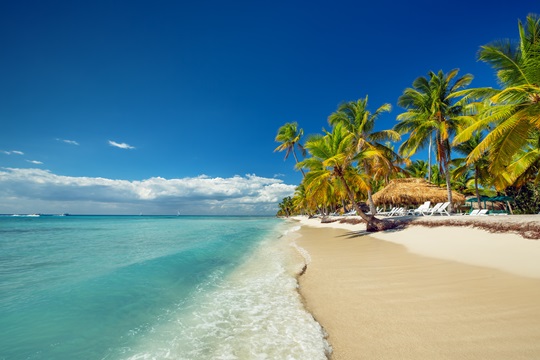 We were walking on hallowed ground. My driver in the Dominican Republic couldn’t believe his luck as we stood on the pitcher’s mound at the Estadio Tetelo Vargas stadium in San Pedro de Macoris. From October until January, these stands are packed with excited, banner-waving fans. Energetic cheerleaders chant their support, competing with vendors selling ice-cold Presidente beer. Now, in the off-season, we were walking on a silent field of dreams. All over the Dominican Republic (DR), kids practise in their yards or in vacant lots, hoping to find their way on to a Major League Baseball team like their heroes Jose Bautista, Edwin Encarnacion and Samy Sosa.

Charming Santo Domingo, the oldest city in the New World, with its flower-filled cobblestone streets, upscale shopping district and ancient architecture hits it out of the park. Visit the Zona Colonial, a square mile carved out of history, with the first cathedral, castle and fortress built after Christopher Columbus landed in 1492. Stay after dark, when the day-trippers leave, to experience the lively restaurants and nightlife along the Calle El Conde. Dining starts late, around 9 in the evening and your bill will include a 10% tip for the house. Leave a little extra for good service. Tip: Since the DR is almost entirely Spanish speaking outside the tourist areas, it’s best to hire a driver or tour company for excursions.

An hour and a half east of the capital, you’ll find a laid-back beach scene at the fishing village of Bayahibe next to the upscale all-inclusive resorts of La Romana. Prepare for an international clientele (read: topless sunbathing). Catch a snorkel tour to the protected islands of Saona and Catalina or dive through the crystal Caribbean waters to the 1699 wreck of Captain Kidd’s ship, the Cara Merchant. Hear artists like Enrique Inglesias and Andrea Bocelli perform under the stars in the 5,000-seat Roman-style amphitheatre at Altos de Chavon.

Punta Cana’s protective reef has everyone in the water, on catamarans, out snorkelling, in glass-bottom boat tours or on horseback, riding on the beach. Cap Cana has the Jack Nicklaus signature Punta Espada golf course and Macao is a surfer’s paradise. A favorite spot for weddings, this area is also party central for the DR.

In the northeast, Samana welcomes humpback whales from mid-January to the end of March. On the northern Atlantic shore, the Coastal Mountains form a pine-covered backdrop to beach towns, resorts and ex-pat communities. Here you’ll find Puerto Plata city with over 150 pastel Victorian houses; the Amber Museum; and the Isabel de Torres Botanical Gardens, perched on a mountainside and accessed by an Italian cable car.

The Dominican Republic occupies the eastern two-thirds of the island of Hispaniola.  The calm waters of the Atlantic Ocean in the north and the turquoise Caribbean Ocean in the south surround 1,288 kilometres of coastline. Haiti lies to the west. The average year round temperature hovers around 26 °C.  September and October can see the occasional hurricane push by, but they rarely make landfall.

If you go: visit godominicanrepublic.com for more information.