Viruses the latest powerful arsenal in the fight against cancer 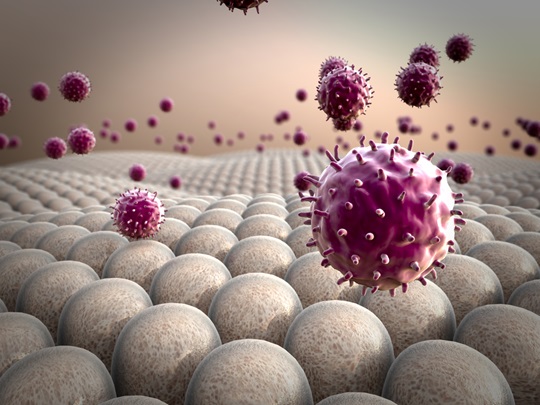 Could a virus cure cancer? If it’s up to Dr. John Bell, the answer is a very promising yes.

According to Dr. Bell, a senior scientist at The Ottawa Hospital and professor at the University of Ottawa, viruses could one day become just as important for treating cancer as surgery, radiation and chemotherapy.

Our bodies are made of up trillions of cells. Things like smoking, UV light and plain old bad luck can cause changes in our cells that allow them to grow uncontrollably, becoming cancer.  Dr. Bell first began thinking about viruses as a possible treatment for cancer more than 15 years ago.

“We were looking at the molecular changes that allow cancer cells to grow so quickly and we found that many of these changes also reduce the cells’ ability to fight off certain viruses,” explains Dr. Bell. “It’s kind of like our cells make a deal with the devil when they become cancer – they grow more quickly but they also become vulnerable to viruses.”

This idea has now grown into a completely new field of cancer research. Dr. Bell and his colleagues have identified many viruses that are naturally better at killing cancer cells than normal cells, and they have used special laboratory techniques to develop new viruses that are even better at this. Laboratory studies have shown that these viruses can spread throughout cancerous tumours and destroy them without harming normal cells.

Dr. Bell and his colleagues have taken this idea all the way from the lab bench to the patient’s bedside. They recently launched the world’s first clinical trial of a double-virus therapy for cancer. This experimental therapy was jointly developed at The Ottawa Hospital, the Children’s Hospital of Eastern Ontario, McMaster University and the University of Ottawa. It uses a virus that was first found in Brazilian sandflies and another virus that is associated with a form of the common cold. It is designed to harness the body’s own immune system to fight cancer, in addition to the viruses.

The trial will include up to 79 patients with advanced cancer in Ottawa, Hamilton, Toronto and Vancouver. To participate, patients must have already tried all available therapies, among many other criteria.

“The trial is ongoing, so we still don’t know if this particular therapy will work in people, but we’re confident that we’re on the right track, and that some kind of viral therapy will eventually play an important role in treating cancer.”

Indeed, the United States has recently approved the first viral therapy for cancer, called T-Vec. This therapy is based on a virus that causes cold sores around the mouth. It has shown great promise in treating certain kinds of skin cancer.

Dr. Bell and his team are already planning a number of other clinical trials and they were recently awarded a $60M grant to create a national network for this kind of research, called BioCanRx. They have also developed a sophisticated manufacturing facility at The Ottawa Hospital that is making viruses for Dr. Bell’s cancer trials, as well other viruses and vaccines for external clients around the world.

“Public support has been crucial for our research,” said Dr. Bell. “We are very thankful for all the generous support we have received.”

The viral therapy trial at The Ottawa Hospital is only accepting a small number of patients, with very specific characteristics. However, many other experimental cancer therapies are available at The Ottawa Hospital and elsewhere across the country. Speak with an oncologist or visit http://www.ohri.ca/newsroom/newsroom.asp to learn more about this as well as other important research underway.